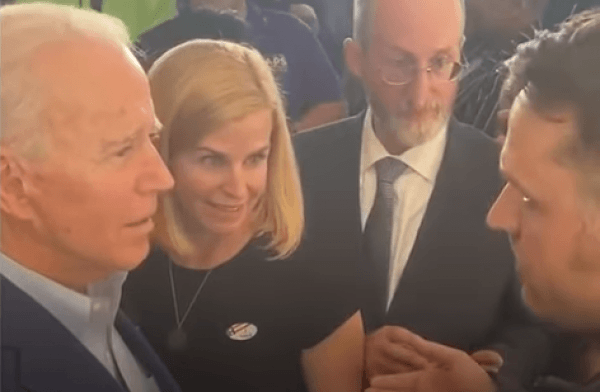 A video is going viral this week showing former Vice President Joe Biden, who is considered to be the new front-runner for the Democratic presidential nomination, confronted by a veteran during a campaign stop in Oakland, California on Tuesday.

Biden had reportedly just given a speech at Buttercup Diner when Air Force veteran Michael Thurman approached him and loudly exclaimed that he had “blood on his hands” for supporting the Iraq War.

“Why should we vote for someone who voted for a war that killed thousands of our brothers and sisters and countless Iraqi civilians?” Thurman asked the former vice president. “You enabled that war. You also gave a medal to the man who caused that war. That blood is on your hands as well.”

Thurman was referring to the fact that Biden presented the Liberty Medal to former President George W. Bush on Veteran’s Day in 2018 for his “support for veterans.”

A clearly flustered Biden responded to Thurman by bringing up his son Beau, who served in Iraq and died of cancer in 2015.

“It matters a lot to me,” Biden said, to which Thurman responded that he was not going after his son. Biden was then led away before he could speak with the veteran any further.

“You are disqualified, sir!” Thurman yelled repeatedly. “My friends are dead.”

“My brothers and sisters died in Iraq and Afghanistan,” he continued shouting. “They are dead. Millions are dead in Iraq! He will not be allowed to be President! Trump is more anti-war than Joe Biden!”

MORE NEWS: Hollywood in Mourning after Elizabeth Warren Drops Out of the Race – ‘I am Grieving’ [9]

Given the fact that Biden’s campaign is just now starting to get traction, this is the last video that the former vice president wants to be making the rounds on the Internet. It doesn’t take much digging to show that Thurman has a point.

Though Biden is campaigning on ending America’s “forever wars,” his voting history tells a different story, as he has long been someone who enabled the aggressive foreign policy establishment, according to Fox News [10]. His 2007 campaign was derailed in part because of his support for the invasion of Iraq in 2003, which has come back to bite him repeatedly in the years since then.