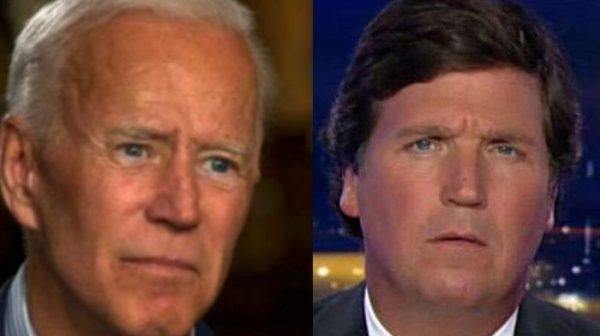 Fox News host Tucker Carlson just predicted that former Vice President Joe Biden “will not be the Democratic nominee” who takes on Donald Trump in the presidential election come November.

Though Biden is still speculated to be the Democratic presidential frontrunner, he does not yet officially have the nomination. On Friday, while appearing on Charlie LeDuff’s podcast “No BS News Hour,” [1] Carlson said he believes that Democrats will find a way to remove the “in decline” Biden and replace him with someone who has a better chance of beating Trump.

While talking about the impending “reorder of our politics” because of the coronavirus pandemic, Carlson said, “I am utterly convinced, and would bet money, that Joe Biden will not be the Democratic nominee on election day. I just don’t believe that. I really don’t.”

“What did you say?” asked a clearly stunned LeDuff.

“I sincerely and totally believe that Joe Biden will not be the Democratic nominee on election day,” Carlson continued. “I don’t believe that.”

“How does that math work?” another co-host asked.

“Well, the math doesn’t work, but it’s not about math, it’s about will,” Carlson explained. “So the Democratic Party is intent on taking power, period, period, and they mean it, and they’re willing to do kind of whatever they think works. I mean that’s demonstrable.”

Carlson went on to say that Biden “is not prepared” and “can’t beat” President Trump or “lead the country,” citing his mental decline as the reason why.

“He shouldn’t be working still,” he said. “I’m not being mean. I know him. I’ve always liked him. But that’s true. And so, those are two trains traveling toward each other at high speed. Two competing imperatives. We’ve got to win, but we’ve got a guy who can’t win. Therefore, they’re gonna replace him.”

“This is not the guy I’ve known, and you can ask anybody who knows him or has watched him,” Carlson added. “This is not him. He’s a completely different person, and he’s in decline and I feel bad about it. That’ll be me someday … I hope somebody loves me enough to not let me run for president.”

Carlson also revealed who he feels will be nominated instead of Biden.

“If I had to bet I would think Andrew Cuomo would be the most likely to replace Biden,” he said, pointing out that former Vice President Hubert Humphrey won the Democratic nomination in 1968 despite not winning any of the state primary elections.

Biden’s mental state has long been called into question because of a number of bizarre television appearances he has made since entering the race, and they only seem to have gotten worse [2] since the start of the coronavirus pandemic. Even many Democrats can’t deny that he is unfit to lead our nation, so it would not be too surprising to learn that they are scrambling to find a replacement for him. It remains to be seen whether their efforts will pay off in November.