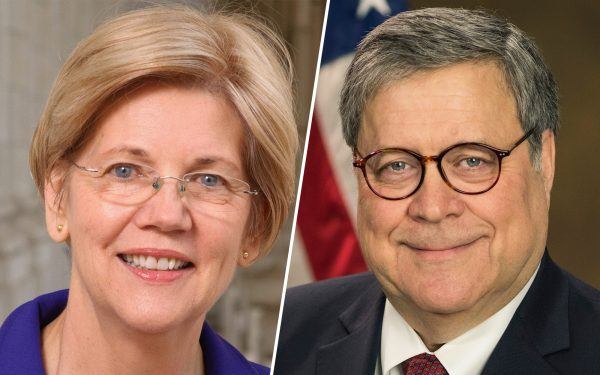 Massachusetts Senator Elizabeth Warren is calling on the House to commence impeachment proceedings if Attorney General Bill Barr does not willingly resign.

Barr has been the subject of scorn after the Department of Justice opted – rightfully – to reduce the amount of jail time requested by federal prosecutors for Roger Stone, a former associate of President Trump.

The DOJ, independently of the President’s own complaints, sought reduction of the “extreme” sentencing request of nine years.

The left has wantonly drawn a line between a tweet from Trump calling the recommendation of nine years to be a “miscarriage of justice” and Barr’s actions in taking charge of a case that had gone off the rails.

As former Rep. Trey Gowdy notes, “There are child pornographers, people who rob banks who do not get nine years.”

Still, the chain of events led four career prosecutors to quit the case after the DOJ revealed their plans.

Now, Warren is demanding Barr either resign or face impeachment.

“We are watching a descent into authoritarianism…We should all be calling on the Attorney General to resign.”

Warren: Barr Has to Go

In an interview with CNN’s Anderson Cooper, Warren suggested she was so distraught over Barr’s actions that she didn’t even want to discuss the election. You know, the one she’s embarrassingly floundering in right now.

“I have to say I know everybody wants to talk about the horse race, but the thing that is really getting to me right now is what’s going on over at the Justice Department,” claimed Warren.

“The whole notion that we have people in our Justice Department resigning because Donald Trump’s inappropriate influence and the attorney general overturning a sentencing of Donald Trump’s cronies,” she lamented.

“You know, right in front of our eyes, we are watching a descent into authoritarianism,” she claimed without evidence. “And this just seems like a moment to me everybody should be speaking up.”

Congress must act immediately to rein in our lawless Attorney General. Barr should resign or face impeachment. And Congress should use spending power to defund the AG’s authority to interfere with anything that affects Trump, his friends, or his elections.

More Democrats ARE Speaking Up

With the group-think paranoia gripping the Democrat party today, the notion that Warren’s call for resignation or impeachment is a novel one is laughable.

“Senate Democrats have called on Attorney General William Barr to resign or face impeachment,” Yahoo News [6] reported, “after President Donald Trump appeared to confirm that Barr had intervened in the case against the president’s longtime friend Roger Stone.”

Of course, that’s a garbage assessment by Yahoo, as the President merely congratulated the attorney general for “taking charge.” There is zero evidence that Barr actually intervened on Trump’s behalf.

Regardless, Senator Richard Blumenthal (D-CT) told NBC News that Barr has “no choice” but to resign because he’s “acting simply as a henchman of the president.”

Calls for impeachment, we’re assuming, are even dumber.