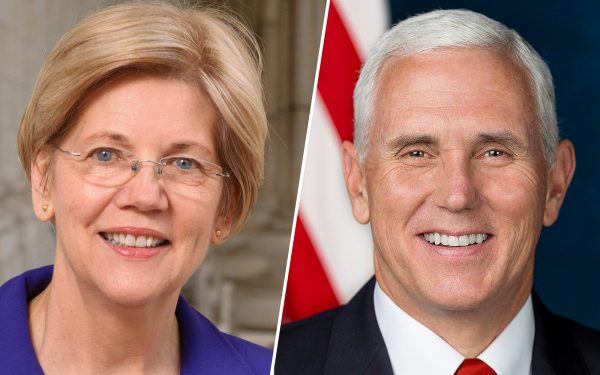 A campaign rally for Senator Elizabeth Warren, D-MA., got a little out of hand on Sunday when she resorted to name-calling, describing Vice President Mike Pence as a “dog.”

During Warren’s rally in Lebanon, New Hampshire, one voter asked the senator if she whispers to her dog Bailey, “Who is going to be my Mike Pence? Who is going to look at me with adoring eyes?”

“I already have a dog,” Warren replied as the audience burst into laughter.

Democrats have since been praising Warren for the insult, saying that it shows she’s the perfect person to take on President Donald Trump.

“She’s absolutely quick witted, she’s funny, she’s sharp, this is a woman that managed to get herself out of her, um, out of Oklahoma into college on a debate scholarship,” Rep. Katie Porter (D-Calif.) told MSNBC. “When it comes time to go toe to toe with Donald Trump, Elizabeth has the ability to think on her feet, she has the depth of policy knowledge, she has the courage and the quick wit, to absolutely defeat Donald Trump in those debates and make the strongest possible contrast.”

AGAIN. WOW. @katieporteroc [6] is just unbelievable. Here she puts Elizabeth Warren referring to Mike Pence as a lapdog in perfect context and tells you why @ewarren [1] is the fighter with the skill to beat Trump. She also tells you why there’s such a gap between Warren and Klobuchar. pic.twitter.com/OTw4bRKMxw [7]

After calling Pence a dog, Warren went on to describe who her ideal vice president would be, adding that she wants someone “who is going to be in the fight” with her.

Given the fact that she’s currently polling in fourth place in New Hampshire, however, it’s wishful thinking for Warren to even be considering who she might want as a Vice President. Perhaps she should focus a little more on winning over voters, and a little less on insulting members of the current administration.