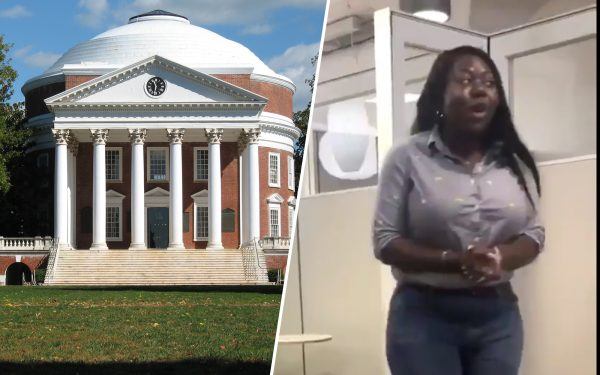 Thomas Jefferson founded it and it is not only prestigious, but considered a beautiful campus. It used to be a center of thought.

But PC has turned some of the students at the University of Virginia into the kind of rabid, not to mention dumb as bricks, racists that would have mortified the slave-owning Jefferson with embarrassment.

In a video posted on Twitter by the Young America’s Foundation and reported by Fox News, an unidentified female student, who has some difficulty with the English language, has this to say from the school’s multicultural center, “If ya’ll didn’t know, this is MSC and frankly there are just too many white people in here and this is a space for people of color. So just be really cognizant of the space that you’re taking up because it does make some of us POC uncomfortable when we see too many white people in here.”

Leftists at the University of Virginia are dictating who is and who isn’t allowed in the new Multicultural Student Center.

“Frankly there is just too many white people in here, and this is a space for people of color.”

This kind of racist intolerance is NOT multicultural. pic.twitter.com/XkefKqfqLA [1]

It seems to have escaped the misguided student that “multicultural” means all cultures, including white people. She was, of course, applauded after her diatribe. Yes, they are in a loving center for tolerance and compassion open to all people of color…except any color approximating white. Then, it’s to the back of the academic bus, whitey.

But you almost, almost, can’t blame her because the poor junior cretin has been fed a diet of venom and bitterness towards whites by predominately, well, guilty whites. Hence the concept of the multiculty center itself.

Including or excluding people by their skin color or cultural heritage would seem to be the opposite of the free academic inquiry and free association that should be at the heart of the college experience. The college library should serve as the true center of any multicultural mission. For there, classified by subject not color, is the breadth of mankind’s culture and knowledge.

However, indoctrination has replaced knowledge as the test of academic achievement at many schools. Hence the attitudes of this young woman and others like her who parrot, only with an ironic twist, the noxious notions of the Klan and other vicious bigots who now can make common cause with this idiotic coed. How?

Thus both are different sides of the same coin.