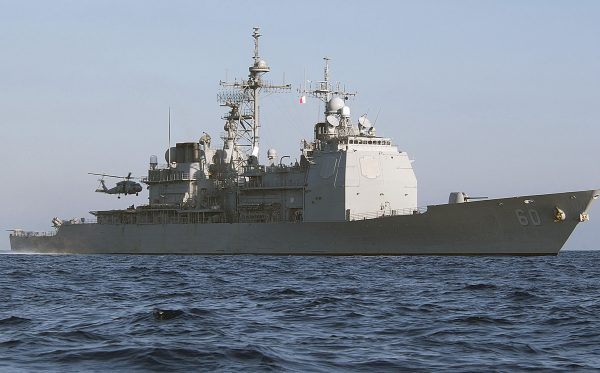 The US Navy seems to have undergone a bit of an attitude adjustment in the last four years.

The naval force under Obama in January of 2016 suffered through the humiliation of having several American sailors taken prisoner by the Iranians in the Persian Gulf. After permitting the Iranians to board their vessel without a shot fired, the U.S. personnel were forced on their knees, hands behind their heads. The pictures of such were spread around the world. It was a snapshot reminiscent of the Iranian hostage drama of 1979-81.

Our fleet now has a different Commander-in-Chief and it shows. The Iranians were reminded of that fact on Sunday, as the USS Normandy searched one of their innocent looking smuggling vessels, a dhow, and viola, made a nice catch of the day.

They seized numerous items including 150 anti-tank guided missiles, SAMs, scopes, munitions, weapons parts, and other tools of war. The cache was on its way to the Houthi rebels in Yemen. The Iranians are in a proxy war with the Saudis in Yemen and the Houthis are Iranian allies.

This is the second time recently the US Navy caught the Iranians in a smuggling operation to the Houthis. In November the USS Forest Sherman made a similar haul, also in the Arabian Sea.

You almost have to feel sorry for leadership in Tehran. For eight happy years they had a steadfast ally in the White House. That de facto Baath Party member sent them cash, cut them a sweetheart nuke deal, and even told the mullahs of Israeli plans to attack their nuclear program.

The Iranians responded to all of the Obama cuddling by sending Qassem Soleimani to kill our forces in Iraq and by seizing our sailors and parading the pics in front of all and sundry.

But strangely now, when US forces board their boats, it’s the Iranians who do the surrendering.

We have here another instructive lesson in the tale of two presidents. One who cowered in front of our enemies (and his covert pals) and one who asserts U.S. interests. It’s a story Tehran is learning to their great distaste.