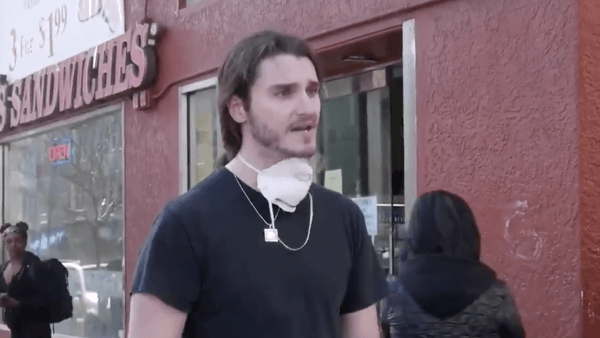 Yes, I am a bit of a weepy sap to begin with, but this really touched my heart.

Scott Presler is a hardworking Trump supporter. You may remember him from all of his “clean up” efforts in liberal cities across America.

Scott travels to the filthiest and most dangerous cities in this country and he pulls together a team of patriots and they clean up tons and tons (literally) of garbage.

He was doing just that in San Fransisco, cleaning up the filth and garbage that politicians like Nancy Pelosi ignore when a local Trump hater got very aggressive towards him.

Sure, Scott could’ve run away, who would blame him with all the liberal violence against Trump supporters?

Something came over him and he turned the moment around.

Scott stood on that street in liberal San Fransisco surrounded by people who hate the man he voted for (and likely hate him too as a result) and he proclaimed his support for Donald J. Trump.

But it was even more than that, he delivered an impassioned speech on why he supports President Trump and all the good that he’s done for the American people, while Democrats support illegal aliens.

As I said earlier, it made me cry – and even more importantly, it left those Trump haters speechless.

I was cleaning up the streets of San Francisco & this young woman became very aggressive.

I don’t know what came over me,

but I proclaimed my support for @realDonaldTrump [2] on the dirty streets of SF & people listened.

I hope this goes viral. pic.twitter.com/ZfIHg1d5SH [3]

This just goes to show that if you speak from your heart and tell the truth people will listen.

God Bless Mr. Presler for taking a stand and putting his money where his mouth is – back up his words with actions and dedicating his life to cleaning up his country.

We need more of this.

This piece originally appeared on WayneDupree.com [5] and is used by permission.