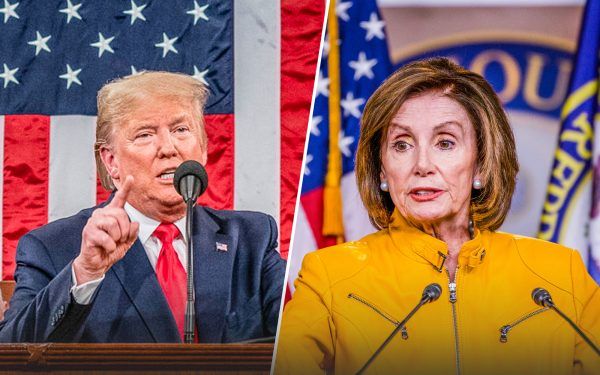 The long, winding road of impeachment has dominated the conversation in Washington since allegations that President Trump withheld military aid from Ukraine as a political tactic to harm Joe Biden became public in September.

Or that is what the media wants us to believe as they will rewrite the narrative. No, it started the day after Trump was elected. Tell the truth.

Democrats said they found collusion? I agree, but not like you think.

Now that I showed you the craziness that is the Democratic Party let’s talk about what their latest failed attempt has resulted in.

RELATED: Opinion: One thing impeachment accomplished — solidify and strengthen Trump’s base for election [1]

Trump’s base of loyal voters and supporters just dug in deep for the election run, and there’s nothing the media can do to stop or change it. Not only did impeachment strengthen Trump’s chances for re-election, but it also showed that any president could be impeached when the opposition party won the majority in the House of Representatives, whether or not a justification for impeachment exists.

In other words, the Democrats were not concerned with what Trump did; they were using all of their investigations to affect change in the upcoming election, just what they accused Trump of doing. Anyone with a brain will recognize this and will not vote for any of the Democrats. Of course, Democrats do not care about reality, they only care about their entitlements.

What other results has impeachment accomplished? It has shown us the insidious side of the Democrats. They think that they are doing this for the greater cause of this country, which they truly believe they are the chosen ones to see things through. It’s really about power and the swamp. And they’re doing this with all of our money. Unfortunately, the Obama years put the Democrats in Lalaland, thinking that all the vote-buying measures he put in place would cement their control forever, then along came Trump. At a time when, under Obama’s watch, only a semblance of this country was left.

RELATED: McCarthy will expunge Trump’s impeachment if Republicans take back the House [2]

The impeachment process was also about voter manipulation. The Democrats have poisoned the election process and will be held responsible in years to come. I blame the media and democrats for dealing with the situation and not doing their job. There is no longer fair news reporting.

The Democratic Party is in freefall, and they don’t have one leader who knows how to fix it or wants to. The mask as been taken off, and America has seen just how ugly and evil that party is.

Most of us in the United States are pretty moderate, but our nominees from both sides may not be in recent years. I think the primary system is broken. The most extreme on either end tend to vote in the primaries disproportionately since the people who care the most about politics are the ones who are paying attention this early. That means that the moderate candidates have a harder time getting nominated, even if they are the ones that most Americans would prefer to vote for.

Please read up on the candidates this year and get out and vote in the primaries.

This piece was written by Wayne Dupree, it originally appeared on ThePoliticalInsider.com [3] and is used by permission.

Read more at ThePoliticalInsider.com:
Outrage After ‘Classless’ Nancy Pelosi Rips Up Trump’s SOTU Speech And Tosses It Away [4]
Nancy Pelosi Says Even if President Trump is Acquitted ‘He Will Not Be Acquitted’ [5]
CNN’s Jim Acosta Gets Nuked Over ‘Disgusting’ Comments About Rush Limbaugh [6]