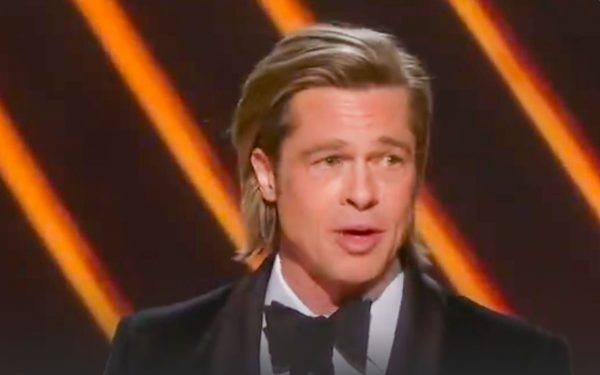 Brad Pitt [1] immediately got political during his acceptance speech at the Oscars after he won Best Supporting Actor.

After thanking the Academy for honoring him with the award, Pitt immediately went political.

As you can see in the video above, he stated, “Wow. Thank you. This is incredible. Really incredible. Thank you to the Academy for this honor of honors.”

He then went political referencing President Donald Trump’s acquittal, “They told me I only have 45 seconds up here, which is 45 seconds more than the Senate gave John Bolton this week.”

Pitt then suggested Once Upon A Time In Hollywood director Quentin Tarantino make a film about the impeachment, “I’m thinking maybe Quentin does a movie about it. In the end the adults do the right thing.”

After making his political stump speech at the Oscars, Pitt seemingly remembered why he was there as he began to thank the people who helped him achieve the award.

“This really is about Quentin’s room. Tarantino, you are original, you are one of a kind – the film industry would be a much drier place without you. And I love the ethos you gave Cliff Booth. Look for the best in people, expect the worse, but look for the best.”

He then thanked his co-star Leonardo DiCaprio, “Leo, I’ll ride on your coattails any day. The view is fantastic. And to the rest of the cast and crew, Big Bad Bob Richardson, Robert Garcia, Richie, my man Mike Moe.”

RELATED: Tim Tebow drops everything to celebrate those with special needs At 2020 ‘Night To Shine’ [6]

He then thanked his stunt doubles, “I also want to say while we are doing all of this, I think it’s time we give a little love to our stunt coordinators and our stunt crews.”

“Listen, I’m a bit gobsmacked, I’m not one to look back, but this has made me do so and I think of my folks taking me to the drive-in to see Butch and Sundance and loading up my car and moving out here. Gina and Ridley giving me my first shot to all the wonderful people I’ve met along the way to stand right here. Once upon a time in Hollywood, ain’t that the truth. This is for my kids who color everything I do. I adore you.”

This isn’t the first time Pitt has gotten political. Back in September, while Pitt was promoting his film Ad Astra with the French paper Journal Du Dimanche, he discussed possible tariffs on French wine given he co-owns a French winery with his ex-wife Angelina Jolie.

Pitt would initially respond indicating he didn’t know enough about the issue. However, he would then state, “Trump represents a much bigger threat on such more serious issues.”

At the time, he didn’t indicate what those issues were. It now appears one of them was Trump’s impeachment.

In a moment of irony, it was Anthony Hopkins who told Brad Pitt, “People ask me questions about present situations in life, and I say, “I don’t know, I’m just an actor. I don’t have any opinions.”

Hopkins added, “Actors are pretty stupid. My opinion is not worth anything. There’s no controversy for me, so don’t engage me in it, because I’m not going to participate.”

RELATED: Bette Midler has bizarre meltdown after she falls for Trump’s trolling video [7]

Pitt responded to Hopkins at the time, “I feel the same. I don’t care. I’m glad things are always evolving and changing, and complaining about it won’t do any good. You work with what you have.”

However, it doesn’t seem Pitt took much away from that interview.

What do you make of Pitt’s recent comments? Are you watching the Oscars? Comment below …

This piece originally appeared on BoundingIntoComics.com [8] and is used by permission.