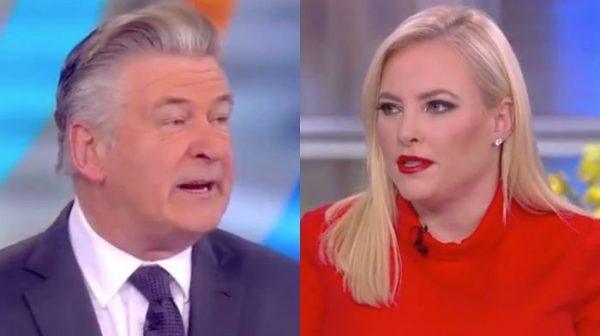 Alec Baldwin, who is best known these days for impersonating President Donald Trump on “Saturday Night Live, appeared this morning on “The View,” where things quickly got heated as the hosts discussed the president’s State of the Union address.

Within seconds of sitting down on the ABC talk show, Baldwin was already showing off his Trump impersonation, imitating Trump as he said, “Our economy is stronger now than it’s ever been.”

Things got serious when the hosts talked about the State of the Union speech that Trump gave last night. While the show’s lone conservative Meghan McCain wasn’t totally sold on the speech, she admitted there were good parts of it.

RELATED: Nancy Pelosi RIPS Donald Trump’s Speech in Half After His SOTU Speech [1]

“There were a lot of moments that seemed really produced to me,” McCain said of it. “His TV background really came out, especially the reuniting of the [military] families, which I loved because I love things like that.”

McCain went on to point out that a CBS News poll [2] had found that 82 percent of independents approved of the speech, adding, “If it weren’t Trump, I probably would have loved it.”

“Even with the lying, though?” a clearly irritated Joy Behar asked.

McCain replied by saying that she “didn’t notice” any lies, going on to add that there was one moment in particular that stuck with her.

“If you’re someone on the right, you probably liked Rush Limbaugh, who is fighting cancer, getting that medal,” she said.

This “triggered” McCain’s cohosts, especially Whoopi Goldberg, who did not hesitate to blast Limbaugh even though he was just diagnosed with Stage 4 lung cancer.

“Now, you know, I am very sorry that Rush is ill, because you never want to wish bad stuff on people,” Goldberg said. “But I’m sorry, I thought that the Medal of Freedom was supposed to go to people who actually did stuff.”

Having stayed silent for too long, Baldwin jumped in to say, “I’ve decided I want to run for president so I can give the Medal of Freedom to Louis C.K.”

Louis C.K. is a comedian who has multiple sexual assault allegations against him by various women. When Behar expressed confusion as to whether Baldwin was kidding about this plan, he claimed that he had indeed been joking.

As the panel continued to bash Limbaugh, McCain explained that Trump was “playing to his base” by giving him the medal, and to remind her cohosts that the radio legend garners “30 million” listeners. This is more than ten times the three million who watch “The View,” according to Fox News [3].

Obviously, this did not sit well with Goldberg.

“Yes, but what has he done that merits the Medal of Freedom?” Goldberg asked.

“He completely changed the paradigm of radio,” McCain fired back.

RELATED: AOC Announces She Is Boycotting The State Of The Union – Doesn’t Want To ‘Normalize Trump’s Lawless Conduct’ [4]

BREAKING DOWN STATE OF THE UNION ADDRESS: From the highly-partisan atmosphere and made-for-TV surprises, the co-hosts and guest co-host Alec Baldwin weigh in on Pres. Trump’s triumphant #SOTU [5] address. https://t.co/NDCD2t1JF8 [6] pic.twitter.com/toCLPceb1A [7]

The hosts of “The View” would do well to remember that the president can award the Medal of Freedom to whomever he pleases, so there’s no reason why Limbaugh should not receive it. Limbaugh may be hated by liberals, but he’s beloved by millions of conservatives, and by far many more people than have ever watched “The View.”