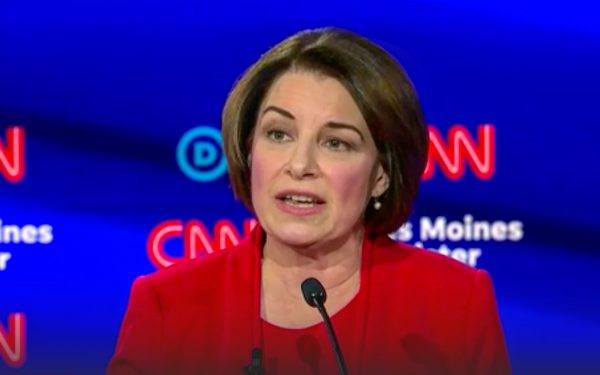 A 2006 video of 2020 Democratic presidential candidate Amy Klobuchar has just surfaced that may destroy her chances of getting the nomination from the increasingly radically left party, as it shows that she at least once held many of the same views as President Donald Trump when it comes immigration.

The footage comes from when Klobuchar was running for U.S. Senate and was taking part in a debate at the University of St. Thomas, according to Breitbart News [1]. The senator who now prides herself on being anti-Trump sounds an awful lot like him in the video.

Not stopping there, Klobuchar expressed her support for a nationwide mandatory E-Verify to open jobs for Americans and ban businesses from hiring illegal immigrants.

Here’s Amy Klobuchar in 2006 talking taking a hardline stance on immigration, supporting a border fence and even criticizing the Bush administration for not cracking down on companies hiring illegal immigrants.

“We need to get order at the border.” pic.twitter.com/bJcsfCQlON [3]

These days, Klobuchar is singing a very different tune when it comes to the border, as she has pledged to rescind all border wall funding that Trump has secured during his presidency. She has also said that as president, she would end the national emergency declaration at the border.

“Stop the diversion of funds needed to modernize our military bases from being used for the border wall,” Klobuchar recently said, adding that she “will rescind President Trump’s national emergency declaration and return funding for its intended purpose.”

In addition, Klobuchar has also said she would turn her back on mandatory E-Verify, saying that she would only support this kind of policy if it comes along with an amnesty for the majority of the 11 to 22 million illegal aliens living across the U.S.

This is a prime example of just how far left Democrats have gone on illegal immigration in recent years. It wasn’t too long ago that most Democratic lawmakers supported common sense immigration laws, but those days are sadly long gone. The further left Democrats like Klobuchar go on border security, the better Trump’s chances are of getting reelected in November.