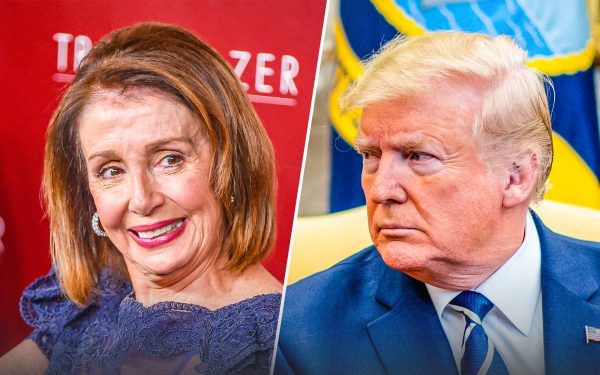 Pelosi announced that the House will consider legislation over the next few weeks to put a halt to the ban which prohibits individuals from terrorist-harboring nations from entering the United States.

“House Democrats continue to stand opposed to President Trump’s cruel, un-American travel ban in all of its iterations,” she said in a statement.

“In the coming weeks, the House Judiciary Committee will mark up and bring to the floor the NO BAN Act to prohibit religious discrimination in our immigration system and limit the President’s ability to impose such biased and bigoted restrictions.”

It’s not a Muslim ban. The travel ban includes North Korea & Venezuela. The majority of Muslims in the world are unaffected. The travel ban is against countries that export terrorism. You know this, Sen Sanders, so why are you lying about it?

The NO BAN Act is a bill brought forth by Rep. Judy Chu (D-CA) and co-sponsored by 214 Democrats.

The legislation is striking for its misguided ignorance of the current travel ban which is aimed at protecting American citizens.

“This bill imposes limitations on the President’s authority to suspend or restrict aliens from entering the United States and terminates certain presidential actions implementing such restrictions,” the summary reads [3].

“It also prohibits religious discrimination in various immigration-related decisions, such as whether to issue an immigrant or non-immigrant visa, with certain exceptions.”

Except, there is no religious discrimination in the travel ban. It’s a completely fabricated interpretation.

Rep. Rashida Tlaib, garnering an ever-expanding reputation for being incapable of speaking the truth, has called the travel ban “straight-up racism.”

Of course, the travel ban has never been about religion. It’s always been about blocking nations who harbor and promote terrorist activity from infiltrating legitimate groups of refugees to cause damage to our nation. There are nearly 50 Muslim-majority countries on the planet – the ban pertains to but a handful.

No more waiting. Too many Muslims have been intentionally targeted, discriminated against, separated from their families and denied opportunities solely based on their faith. Straight up racism!

Pelosi’s announcement is two-fold: It takes away from the fact that this is the three-year anniversary of the President signing the order to suspend immigration from seven nations associated with extremism, and it is return fire for Trump’s announcement that he is looking to double the number of nations on the list.

“The countries on the proposed expansion list include allies that fall short on certain security measures,” the Associated Press [10] reported earlier this month.

Trump himself confirmed plans to expand the list in an interview [11] with the Wall Street Journal last week.

White House spokesman Hogan Gidley explained, “the travel ban has been very successful in protecting our country and raising the security baseline around the world.”

“We do not want to import terrorism or any other national security threat into the United States.”

Well, most people don’t want that – but Democrats certainly do.

This piece originally appeared on ThePoliticalInsider.com [12] and is used by permission.