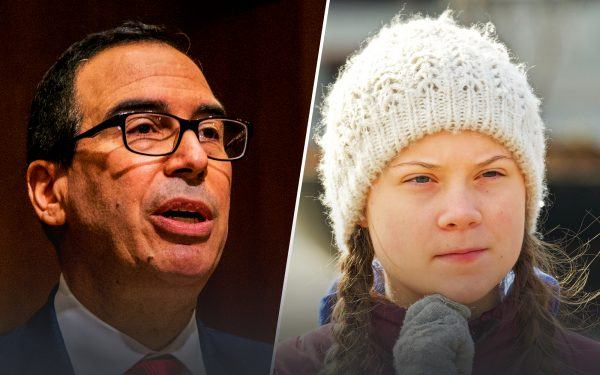 U.S. Treasury Secretary Steven Mnuchin had no interest in discussing the economic ideas of climate activist Greta Thunberg, instead suggesting she get an education instead of pretending to be an authority on the matter.

Mnuchin made his comments at a press briefing at the World Economic Forum in Davos, Switzerland.

Thunberg, in an op-ed published in the Guardian [1], demanded the world’s businesses eliminate the use of fossil fuels “right now [2].”

“We demand that at this year’s forum, participants from all companies, banks, institutions, and governments immediately halt all investments in fossil fuel exploration and extraction, immediately end all fossil fuel subsidies and immediately and completely divest from fossil fuels,” she wrote.

Reporters wanted Mnuchin’s thoughts and the Trump cabinet member wasn’t having it.

When asked how Thunberg’s suggestion to eliminate fossil fuels would affect the U.S. economy – Hint: It would collapse – Mnuchin couldn’t contain his condescension.

“Is she the chief economist? Who is she? I’m confused,” he said adding that his comments were meant as “a joke.”

The Treasury Secretary then suggested Thunberg get herself an education [7] before lecturing the world on things involving the economy.

“After she goes and studies economics in college, she can come back and explain that to us,” he advised.

Doesn’t he know by now, with the example set by global warming extremist Alexandria Ocasio-Cortez, that even a degree in economics doesn’t necessarily make you a brilliant mind on the matter?

AOC to the Rescue

Isn’t it something that climate extremists look to emotionally troubled children to promote their alarmism? Perhaps it’s because they share similar emotionally stunted thoughts.

Rep. Rashida Tlaib (D-MN) recently claimed her son is her policy adviser, bragging that he thinks the world will end by 2030.

Ocasio-Cortez (D-NY) has fretted about the world ending in 10 years as well.

These sound like comments that would come from children.

That is why they look to Thunberg as a leader because her underdeveloped mind creates thoughts and ideas that validate the left’s extreme, low-information platforms.

If you don’t have an economics degree like Greta, they’ll mock you for not having one.

If you DO have one, as I do, they’ll claim it’s illegitimate.

Haters gonna hate & deniers will deny. They will deny logic, science, and environmental consensus in order to protect oligarchy. https://t.co/6b0S40MQk2 [9]

“It doesn’t take a college degree in economics to [realize] that our remaining 1,5° carbon budget and ongoing fossil fuel subsidies and investments don’t add up,” a tweet from Thunberg’s account reads.

Odd that she’s interested in engaging with the Trump administration now.

It was just a few weeks ago that Thunberg claimed she wouldn’t bother to meet with President Trump because it’d be a waste of her time [12].

Trump mocked her by suggesting she “work on her Anger Management problem” and “go to a good old fashioned movie with a friend.”

This piece originally appeared on ThePoliticalInsider.com [13] and is used by permission.