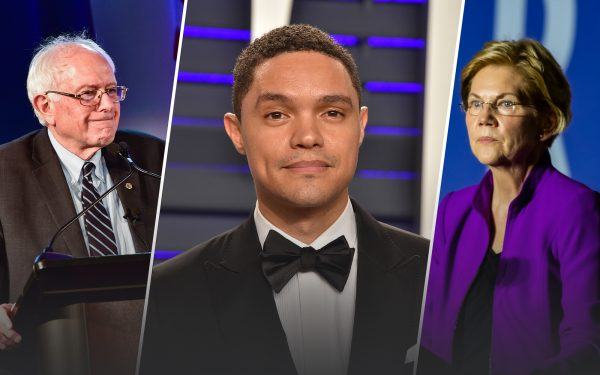 Late night television hosts are typically firmly on the side of Democrats when it comes to elections.

That’s why it had to sting for the 2020 Democratic presidential candidates last night when late night personalities absolutely roasted them after their latest debate.

As you can tell, all six of the candidates were white, which is a major no-no in the “woke” world of the modern left. Unsurprisingly, liberal late night hosts were not going to let the Democrats off the hook for holding “the whitest debate yet” when it came time for them to recap the debate.

“With only six candidates, it was the smallest debate yet, but it was also the whitest debate yet,” said “Daily Show” host Trevor Noah. “The only person happy about this was Greta Thunberg because the stage was so white it reflected the sun back into the atmosphere.”

“Late Show” host Stephen Colbert also got in on the action, going after Democrats for their lack of diversity.

“There was controversy because tonight was the first time in this election cycle that Democrats had an all-white debate stage,” Colbert said. “Once again, J-Lo was robbed.”

Colbert was referring to the fact that this week’s Oscar nominations [2] were slammed once again for having the majority of the nominees be white men. Jennifer Lopez (aka J-Lo) was snubbed for her role in the movie Hustlers, which most pundits had expected she would score a nomination for.

Democrats dug their own hole on this one thanks to their obsession with identity politics in recent years. Perhaps liberals should have thought twice before they made absolutely everything about race.

If Republicans ended up with six white presidential candidates, leftists would be up in arms hurling accusations of racism left and right, so it’s only fair that they be given the same treatment themselves.

Late night hosts are so vehemently anti-Trump that just the fact that they are criticizing the Democratic candidates at all should show the left that they are in big trouble going into this election. If Democrats don’t come up with a plan quickly, they will be handing Trump another victory come November.