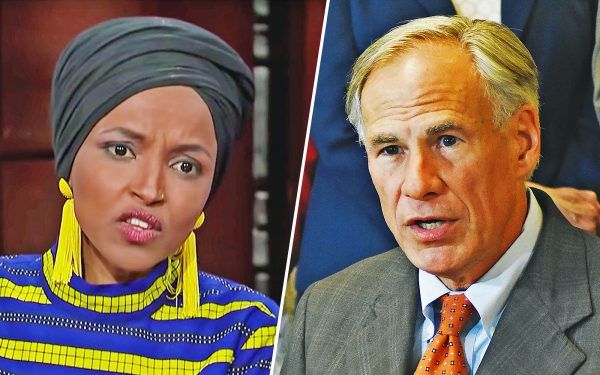 When Texas became the first state to opt out of a federal refugee resettlement program in 2020, of course Democratic Congresswoman Ilhan Omar had something to say about it.

Governor: Texas has already done ‘more than its fair share’ in resettling refugees

Texas’s decision was made possible due to an executive order from President Trump. Earlier in the week, Omar criticized a similar move by county-level officials in her home state of Minnesota that was also made possible via Trump’s order.

Republican Governor Greg Abbott said in a letter sent Friday to Secretary of State Mike Pompeo that Texas has already done “more than its fair share” in resettling refugees and “continues to have to deal with the consequences of an immigration system that Congress has failed to fix.”

#Breaking [1]: Texas governor @GregAbbott_TX [2] says no to more #refugee [3] resettlement. “Texas has carried more than its share in assisting the refugee resettlement process, and appreciates that other states are available to help with these efforts.” 👇🏽 pic.twitter.com/XyOqoMM44P [4]

Since 2010, “more refugees have been received in Texas than in any other state,” Abbott wrote.

This was about all Omar could stand, apparently.

Omar tweeted words from  “The New Colossus,” the 1883 sonnet by American poet Emma Lazarus that can be found on the Statue of Liberty’s base

“With silent lips. ‘Give me your tired, your poor, Your huddled masses yearning to breathe free, The wretched refuse of your teeming shore,’” Omar quoted.

Omar then wrote, “These are the words that welcomed me and millions of refugees. I still believe in those values. We shall overcome.”

Fox News [7] reported, “Omar has been vocal on the issue since Beltrami County, Minn., voted earlier this week to ban refugee resettlement, with some native Minnesotans citing rising crime rates and others claiming a lack of resources in the budget.”

“Last September, Trump signed an executive order requiring that resettlement agencies get written consent from state and local officials in any jurisdiction where they want to help resettle refugees beyond June 2020,” Fox News noted. “The president cut the number of refugees allowed into the country for the 2020 fiscal year to a historic low of 18,000. About 30,000 refugees were resettled in the U.S. during the previous fiscal year.”

Related: Ilhan Omar Giggles During Remarks on US Casualties, House Colleague Calls it a ‘Disgrace’ [10]

“Texas has large refugee populations in several of its cities and has long been a leader in settling refugees, taking in more than any other state during the 2018 governmental fiscal year, according to the United Nations High Commissioner for Refugees,” Fox News added. “Since the 2002 fiscal year, Texas has resettled an estimated 88,300 refugees, second only to California, according to the Pew Research Center.”

Gov. Abbott explained that he wanted to put the people already residing in Texas first, writing, “At this time, the state and non-profit organizations have a responsibility to dedicate available resources to those who are already here, including refugees, migrants, and the homeless – all Texans.”

This piece originally appeared on ThePoliticalInsider.com [11] and is used by permission.

Read more at ThePoliticalInsider.com:
Pelosi Threatens the President: ‘One Way or Another’ We Will Remove Trump [12]
Rewriting History? Pelosi Says Clinton Allowed Witnesses In His Impeachment Trial But Trump Won’t [13]
Fake News Nancy: Pelosi Claims Iranians Not Protesting Against Regime [14]