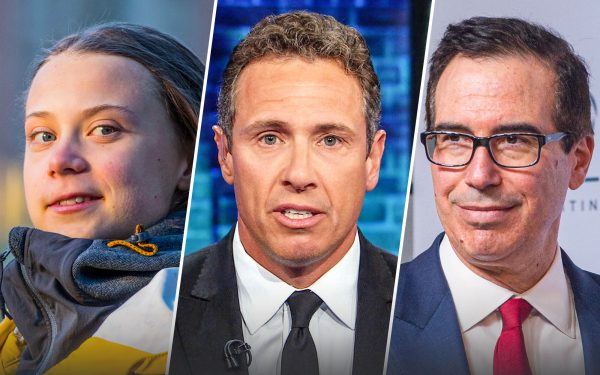 Have you ever said something and then a split second later wished you hadn’t?

Of course. We all have.

It’s usually because you quickly realize that whatever you said flies in the face of your own actions or statements.

When a normal person says that they immediately apologize or otherwise rhetorically fall back to another conversational gambit, lest they be accused of rank hypocrisy.

But, CNN’s Chris Cuomo is far from normal. As a liberal elitist, the regular standards of behavior don’t apply to him, only to us lesser mortals.

RELATED: CNN Analyst Admits ‘Maybe I Made Up the Convo’ Between Two Senators Shocked at Trump’s Action [1]

That’s why he felt just fine in castigating Trump Secretary of the Treasury Steve Mnuchin when he said of Greta Thunberg at Davos, as she advised that nations divest from fossil fuels, “Is she the chief economist? Who is she? I’m confused. After she goes and studies economics in college, she can come back and explain that to us.”

Mnuchin exposed one of the great frauds of our time, the idea that adolescents can teach us anything about public policy.

By their lack of education, and paucity of life and professional experience, especially the life experience, they are by definition behind the power curve compared to their elders and always will be.

That doesn’t mean they can’t be sharp or erudite in certain areas. It does mean what they pronounce will always be colored by their lack of real-world experience.

We speak mostly of teenagers. As those kids grow, so sometimes do their wisdom if they have trod down the right educational paths. If not, only their ignorance grows.

When it comes to a bratty hilariously chosen 17 year old TIME magazine fave, like the the non-smiling Thunberg, the case is clear. If anything, Mnuchin went easy on her. But that didn’t sit well with Cuomo.

Here’s what he tweeted:

“Why do these trumpers think it is ok to go at a kid?”

Gee, what company just paid out probable millions in a legal settlement [2] when they went after ‘kid’ Nick Sandmann? Uh huh. CNN.

And who led that attack? Uh huh. Chris Cuomo.

In the fever swamp that passes for Cuomo’s mind, did he just decide that never happened? Did he realize it did and then walk back his words?

Who knows and no.

What we do know is that for a network and pundit infamous for a lack of self-awareness this is a chart topper. There promises to be more to come.