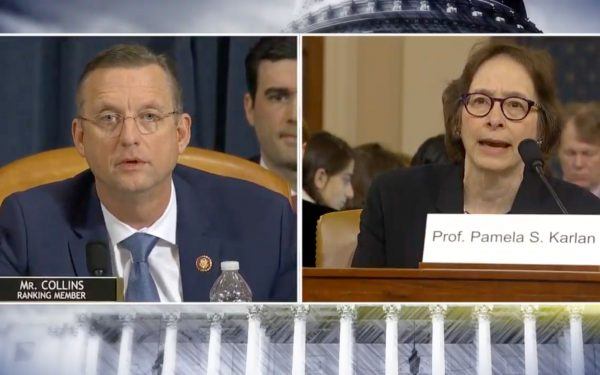 After Wednesday’s House Judiciary Committee impeachment hearing [1]s, the contrived legal scholarship — and also the truth — are said and done.

The result that will matter most is how this all plays with the American people.

Two witnesses — as opposed to the impeachment inquiry from the House Intelligence Committee, when members Rep. Jim Jordan (R-Ohio) and Rep. Devin Nunes (R-Ca.) ruled the hour — made the most difference in public perception.

One, Jonathan Turley, a law professor at George Washington University [2], intended that result in his judicious defense of the president against the impeachment charade.

The other, Pamela Karlan (shown above right), a law professor at Stanford University, made an impression, all right — perhaps not quite the one she had in mind, however.

Here’s a dive into the details.

Winner. Professor Turley was the undoubted individual winner of the proceedings. His measured tone, respectful manner and yet forceful delivery, and valid points left the Dems gasping for political air.

One by one, he knocked down their arguments, calling their inquiry a probe “with no limiting principles,” telling them they valued “inference over information, presumption over truth,” and calling them to task for their “abuse of power.”

He ripped into their confused agenda of taking the British concept of a no-confidence vote in a sitting prime minister — and trying to apply it to the American federal system after the Founding Fathers expressly rejected that. Turley made the point more than once that “the president does not serve at the pleasure of the House.”

He also upbraided the Democrats for their personal animus against the president [3] but lack of legal ground to stand by, saying, “Contemptible is not synonymous with impeachable.”

Loser. Professor Karlan of Stanford stood out for far different reasons on Wednesday. Her hectoring voice, strident mannerisms, and hard-Left ideology might have been excused by many as the enthusiasm of a true believer in her cause.

That is, until she mentioned — out of the blue — the president’s youngest child, Barron Trump.

Granted, she mentioned the young teenager as part of a bad pun, when she said that even though he was named Barron, the president was not a king and thus could not make him “a baron.” She later apologized.

But it was too late — and it was too little. She went after the president while “apologizing.” She was the biggest loser of the day.

A rule of basic decency followed in the main by both sides in politics — maybe the only rule left that’s followed (mostly) by both — is that families are off-limits. When right-wing zealots criticized the Obama daughters, they were rightly castigated. Dems in the past came to the defense of George W. Bush’s daughters after unfair left-wing jibes.

But in her out-of-bounds and cranky zeal to go after anything connected to President Trump, Karlan had to bring his youngest child into it. The reaction from many quarters was — to use a phrase Dems did not like to be reminded of — fast and furious.

Here’s a stern rebuke from the first lady:

A minor child deserves privacy and should be kept out of politics. Pamela Karlan, you should be ashamed of your very angry and obviously biased public pandering, and using a child to do it.

And from supporters of the president:

So Hunter Biden is off limits, but 13 year old Barron Trump is not?

This gets more unreal by the minute!

And from the White House:

Classless move by a Democratic “witness”. Prof Karlan uses a teenage boy who has nothing to do with this joke of a hearing (and deserves privacy) as a punchline. And what’s worse, it’s met by laughter in the hearing room. What is being done to this country is no laughing matter.

And from one of Barron Trump’s older siblings.

How vile of a person do you have to be to attack a 13 year old child on national TV for laughs?

Apparently, vile enough to be the supposed star witness for Democrats.

#PamelaKarlan [10] probably thought the American people will take what she tosses just like her cats do. #ImpeachingHoax [11] pic.twitter.com/zYNsb9zsFi [12]

Many moms in America were no doubt outraged. Teenagers possibly wondered why Barron Trump, who has nothing to do with any of this, was dragged into the House Judiciary hearings. And the reactions of some dads are probably completely unprintable in a family publication.

In one vicious remark, Karlan gave the narrative over to the GOP and played into every stereotype of the feminist harpy. Whatever points she might have made earlier were lost in the appropriate din.

Loser. As for professor Noah Feldman of Harvard Law School, he was so overly dramatic on Wednesday that his mien was more in keeping with that of a high school drama teacher than a legal scholar. This analyst almost expected him to jump up on the witness table and break into a show tune.

His points were Democrat boilerplate. On Wednesday, he was one of the losers — of the medium variety.

Winner. Rep. Matt Gaetz of Florida was the outstanding GOP committee member, holding to task all three Democrat-called witnesses for their obvious bias.

He brought to light that Karlan, far from being a mere scholar, is also a leftist activist. She once said the president should be impeached for his tweets.

Karlan also has donated thousands of dollars to Democrat candidates and causes, including the presidential campaign of Sen. Elizabeth Warren (D-Mass.). So she is no disinterested legal observer, but a Dem player in this constitutional masquerade.

Gaetz also mentioned the long-time Democrat allegiances of two of the other law professors called by those on the Left, Feldman as well as Michael Gerhardt of the University of North Carolina at Chapel Hill.

.@RepMattGaetz [14] just brought the house down.

When will Democrats bring in witnesses with actual first-hand knowledge of @RepAdamSchiff [15]'s sham #impeachment [16] report?

Winner. Rep. Ken Buck of Colorado [3], in a powerful performance, used historical example to put the absurdity of the Democrat charges in proper context.

He ripped away any veneer of scholarship that the Dem witnesses might have clung to in their missed shot at the president.

That’s two for two for Buck, as he did excellent work during the Intel Committee’s impeachment inquiry as well. A double winner.

Winner. And Ranking Member Rep. Doug Collins finished off the GOP message with a blistering attack on the Dems and on Chairman Jerry Nadler (D-N.Y.), accusing them of being more concerned with “clock and calendar” than with the law or the country.

Collins hammered away that no crime was ever seen or heard firsthand from any of the fact witnesses in the entire impeachment process. Yet the Dems have still tried to overturn the expressed political will of the American people in the presidential election of 2016.

The closing statement of the day by Nadler was thin gruel compared to Collins’ rousing defense of President Donald Trump and his rhetorical vivisection of the Dems.

The day’s big winners: Turley [2], the GOP, and the president.

The day’s big losers: Karlan, the Dems, and any shred of intellectual credibility left to impeachment.

The entire House likely will vote soon to impeach the president — and the action then will switch to the Senate.