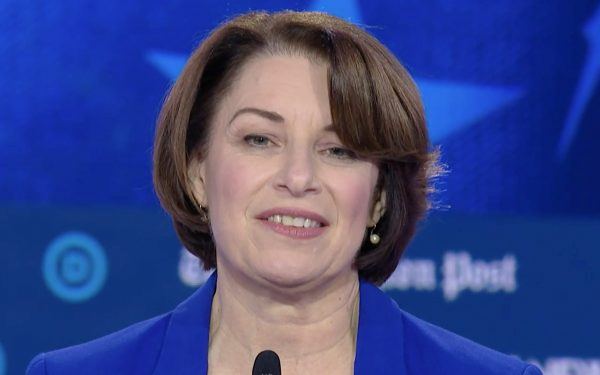 We’ve come a long way from the two-night Democrat debates [1] this past summer with overflowing stages of presidential hopefuls.

Now, with only seven candidates qualifying for Thursday night’s face-off in Los Angeles, the American people (those who even knew there was a debate) got the chance to hear these individuals speak for a longer period of time — and go after each other more often.

To no one’s surprise, the debate this week was filled with impeachment rhetoric [2] and the bashing of President Donald Trump [2].

Right out of the gate, the first question to the candidates focused on what they could do to “persuade” Americans that Trump should be impeached [3].

Everyone on stage had a well-rehearsed Trump rant — but tech entrepreneur Andrew Yang stood apart from the others by saying they could never beat Trump by obsessing over impeachment, so instead they should focus on solving the problems of the country that Trump has understood so well.

To win, Yang said, Democrats would need to have a positive vision for the country. This time the audience took notice — but it wasn’t because he was tie-less and wearing a “MATH” pin.

But that was just a momentary focus on “positivity” — because soon after that, the gloves came off.

Moving up in the Iowa polls and even pulling ahead in New Hampshire, Mayor Pete Buttigieg of South Bend, Indiana, found himself the target primarily of two individuals: Sen. Elizabeth Warren (D-Mass.) and Sen. Amy Klobuchar (D-Minn.) (shown at the top of this article).

Warren first went after Buttigieg for having wealthy donors fund his campaign — and called him out on a “closed-door” fundraiser held in a Napa Valley “wine cave.”

But he came back at her relentlessly, noting he was the only one on stage who wasn’t a millionaire or billionaire [4] and that he wanted campaign money from anyone who hopes he can beat Trump. Apparently, for Warren, not all “green” is equal — and she said she is refusing corporate or billionaire money and holds fundraisers that only open to the press, and no others.

Then Klobuchar came at Buttigieg — and gave him a punch that seemed to surprise everybody. In politics, a minute can be a long time — so something said a month ago is often long forgotten, but apparently not for her.

Klobuchar couldn’t wait to address his comment from the last debate, when he questioned where the 100 years of experience on the stage had gotten the country. She called him out toughly on that and began citing her own accomplishments and that of some of the others.

She was more scolding than inspiring — and that attitude returned again in Klobuchar’s closing statement later, when she decided to put down Trump merely because money from his father gave him a head start in the business world. Yet despite her newfound confidence on the debate stage, this attitude fell flat in both instances.

Then along came former Vice President Joe Biden [6] and Sen. Bernie Sanders (I-Vt.). In the last two debates, Biden dominated — but not for the right reasons, but by his strange answers and gaffes.

On Thursday night, he seemed to be trying hard to show signs of strength — and lost his cool with Sanders on the subject of health care. Their sparring match was the loudest of the night. [6]

Unfortunately for Biden, he came across as angry and frustrated — which may have had the audience both last night and still today questioning his abilities if he ever were to step into the ring with powerhouse President Trump.

More than once, Warren [7] told the audience she’d taken 100,000 selfies on the campaign trail by this time. She used this to make the case for how she would improve the lives of Americans by sharing some of the hardship stories she’s been hearing from the people in those selfies.

Despite her weepy look, this line of commentary felt staged, rehearsed, and uninspiring.

Biden then swooped in — and made Warren’s remarks seem even more insignificant by saying that he, too, had been taking selfies at his campaign stops.

Billionaire Tom Steyer kept his eyes on the camera and let the audience at home know repeatedly that climate change would be his top priority if he were to make it to the White House. He seemed scripted and appeared completely unrelatable to viewers.

While Klobuchar had her missteps, she communicated more effectively than some of the others by at least making some connections with viewers and Americans at home on health care and more.

The final question of the evening from moderators was a rather ridiculous one: In this holiday season, did the candidates want to ask for forgiveness from anyone on stage or give a gift?

Yang was the first to be asked — and therefore he had no time to prepare, which he quickly made clear by some initial laughter and hesitation. But then he seized on a marketing opportunity — and said he’d love to give the gift of his book to everyone on stage. How many points that earned him with viewers remains to be seen.

This last debate of the 2019 calendar year offered Americans little insight overall as to what these seven Democrats would and could do to help improve the country. However, it is clear these Democrats are willing to go to great lengths to kick Trump out of office — no matter what that would do to our nation.