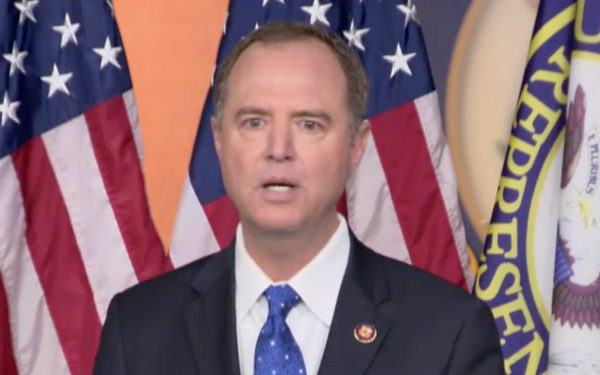 House Intelligence Committee Chairman Adam Schiff (D-Calif.) is giving members of his committee just 24 hours to read and give the green light to his report recommending articles of impeachment against President Donald Trump.

House Judiciary Committee Chairman Jerry Nadler (D-N.Y.) has seen the report — and said it includes evidence of “collusion” with Russia as well as Ukraine.

It’s worth noting that Ukraine is Russia’s enemy.

On Monday, Schiff reportedly will provide the entire report to committee members.

They will have to sign off on it no later than Tuesday since the first hearing in Nadler’s committee takes place on Wednesday.

Related: Meghan McCain Is Slapped Down on Her Impeachment Views [1]

That hearing will review the supposed constitutional basis for impeachment.

Most assume Democrats will agree with and approve of Schiff’s report.

What’s the rush? Adam Schiff’s committee is only giving members 24 hours to review the impeachment report before voting https://t.co/JG8DoDVsqB [2]

Not that actual evidence seems to matter much to Democrats, it seems to us.

A majority of Dems favored [4] an impeachment inquiry by August 1 — almost a week-and-a-half before the so-called “whistleblower” contacted Schiff to complain about the Trump’s phone call with Ukrainian President Volodymyr Zelensky.

Many speculate that Democrats are worried about letting impeachment affect the 2020 presidential primary.

Several U.S. senators who are running for the White House will have to leave the campaign trail.

They are also worried the public doesn’t want impeachment and that could be reflected by a Trump victory next November.

They're not even pretending to take this impeachment seriously

Could it be because the IG report is coming out on the 9th?

But the Democrats’ rush to impeach this president without really knowing why has been a factor from the very beginning.

On the same day that House Speaker Nancy Pelosi (D-Calif.) announced an impeachment inquiry, Trump had already declared he had declassified the transcript of the phone call with Ukraine’s president.

Still, Pelosi did not want to wait [6] for the evidence.

Clearly, this has always been all about politics, as we see it.

Even the Intelligence Committee rushed its proceedings before any supposed evidence was available to congressional members.

Nadler says President Trump has until Friday to respond to a request to participate in the Judiciary Committee’s impeachment proceedings.