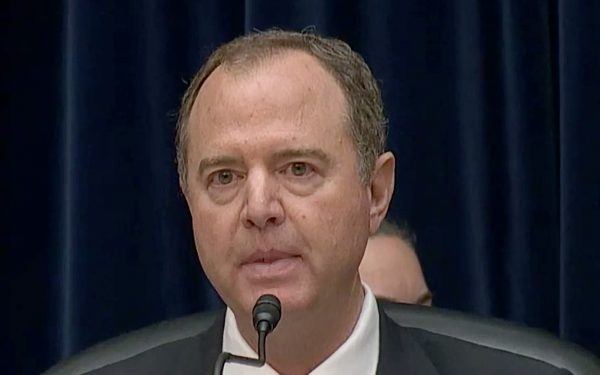 Anti-impeachment [1] protesters caused quite a ruckus during remarks by Rep. Adam Schiff (D-Calif.) at an Armenian Genocide Recognition resolution event.

The event was held in Glendale, California, to thank the House of Representatives for passing a resolution affirming its recognition of the Armenian genocide.

The scuffles and outburst lasted for roughly 15 minutes, one attendant reported.

Here are some of the tweets about what happened.

And see the video within the second tweet below.

Disgraceful @AdamSchiff [2] was just booed off the stage at an Armenian Genocide event in Los Angeles! pic.twitter.com/NScNAqzgas [3]

This is how Trump supporters fight back.

They disrupt globalist elites when they speak at public events.

Democrats and those on the Left have been successfully doing this to those on the Right for years — and turnabout is fair play.

If you want to beat the Dems, you need to do it on their level, as I see it.

There is no “high road” anymore or “turn the other cheek” business.

That is the mentality that got us into this mess, in my opinion.

It’s time to fight fire with fire — because we’re fighting to save our president and our country.

A version of this piece originally appeared on WayneDupree.com; [12] this article is used by permission.

Read more at WayneDupree.com:
Opinion: Hillary Gets ‘Work Done’ on Her Face and It Looks Absolutely Terrifying [13]
Report: Hunter Biden Is a Daddy Again … Second Time in One Month! [14]
On Impeachment Trial, Trump Says His Team Will Be Ready [15]