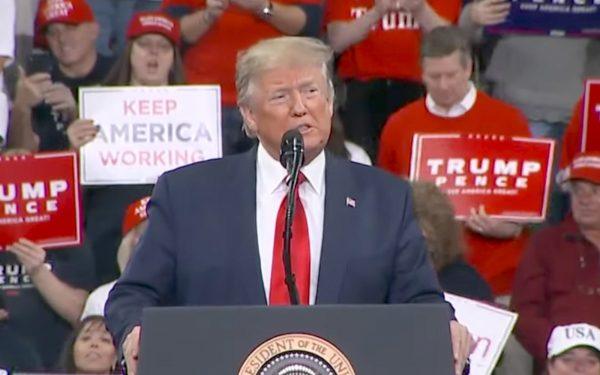 And the surveys  from Quinnipiac [3] and Monmouth University [4] — overall indicate little movement in the minds of Americans on impeachment and on Trump’s approval rating over the past month. This, following dramatic public hearings by the House Intelligence and Judiciary Committees that culminated Tuesday with Democrats unveiling impeachment articles alleging Trump abused the power of his office and obstructed the congressional investigation into his alleged wrongdoing.

According to the Monmouth poll — which was released Wednesday — 50 percent said the president should not be impeached and removed from office, with 45 percent calling for impeachment and removal from the White House.

The numbers are little changed from Monmouth’s November poll, when a 51-44 percent majority opposed impeachment and removal.

Related: These Five Dems Could Be Doomed if They Vote for Trump’s Impeachment [5]

“Opinion on impeachment has been rock steady since news of the Ukraine call first broke. Any small shifts we are seeing now are likely to be statistical noise,” Patrick Murray, Monmouth University Polling Institute director, emphasized.

It’s a similar story in the Quinnipiac survey, which was released on Tuesday. By a 51-45 percent margin, Americans opposed impeaching and removing the president, little changed from the school’s late November poll.

The full House of Representatives is expected to vote on the articles of impeachment in the coming days, with a Senate trial likely to be held next month, after the holiday break.

The president’s facing impeachment over his July 25 call with Ukrainian President Volodymyr Zelensky [6], in which he urged Zelensky to investigate former Vice President Joe Biden his son Hunter over their dealings in the eastern European country.

Biden is one of the top Democratic 2020 presidential contenders hoping to challenge Trump in next year’s election.

Fueled by whistleblower complaints, a transcript of the call released by the White House, and testimony by witnesses in the inquiry, Democrats say that the president was asking a foreign country to potentially interfere in a U.S. election.

Adding to the controversy was the fact that before that phone call, millions in U.S. military aid to Ukraine was put on hold. Despite allegations that the president was using that money as leverage, Trump has repeatedly insisted that he did nothing wrong.

He says there was no “quid pro quo” and has on numerous occasions described his conversation with the Ukrainian leader as “perfect.”

Both polls indicate — as expected — a continued vast partisan divide between Democrats and Republicans over impeachment.

But among independent voters, the Monmouth survey indicates by a wide 55-36 percent margin, they oppose impeaching and removing Trump from the presidency. In the Quinnipiac poll, independents oppose the move by a smaller 52-44 percent margin.

The impeachment developments, which have dominated headlines in the media the past couple of months, appear to have had little impact on Trump’s approval rating — a key indicator of a president’s clout and standing.

Trump stands at 43 percent approval and 50 percent disapproval in the new Monmouth poll, which is little changed from his 43-51 percent standing last month.

The president registers at 41 percent approval and 55 percent disapproval in the Quinnipiac survey, close to his 40-54 percent standing in late November.

The survey’s margin of error is plus or minus 3.3 percentage points.

Paul Steinhauser is a politics reporter based in New Hampshire. This Fox News [7] piece is used by permission.