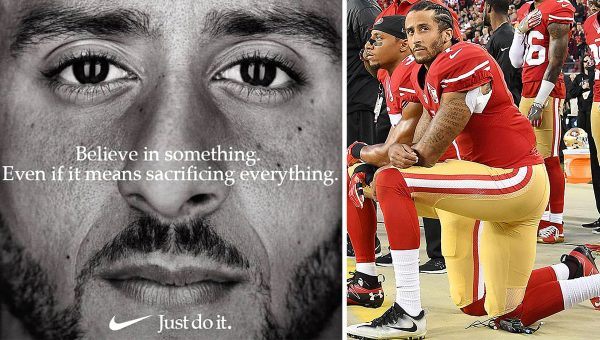 No National Football League team is interested in signing Colin Kaepernick [1] or playing his games — so he’s attacking America.

This year was the 50th ceremony commemorating the Occupation of Alcatraz that began on Nov. 20, 1969.

I bet Kaepernick would have had a completely different opinion of things if somebody had signed him and paid him a few million dollars.

Amazing how a pro sports contract can change a person’s point of view, in my opinion.

Related: Kaepernick Should Get a Football Job Only if He’s Good Enough, Says Trump [1]

No one wants a player who constantly trashes the country that did so much for him.

I have to ask: How much of his wealth has been donated to organizations that help poor, oppressed kids?

How many press conferences has he held to explain his positions sanely?

How many houses has he helped turn back into livable homes for people living in troubled neighborhoods?

The event is intended to celebrate the 50th anniversary of Native-Americans occupying the famous island, which previously served as the site of a federal prison.

“Spent the morning at the Indigenous People’s Sunrise Ceremony on the 50-year anniversary of the Occupation of Alcatraz,” Kaepernick tweeted on Thanksgiving day.

“The U.S. government has stolen over 1.5 billion acres of land from Indigenous people. Thank you to my Indigenous family. I’m with you today and always.”

He tweeted a video of a man proclaiming that Native-Americans were taking the land by “right of discovery.” The video also appeared to show him speaking to celebrants on the island.

“It’s been 50 years since the occupation,” Kaepernick said. “And that struggle has continued for that 50 years … It’s our responsibility to honor our ancestors and honor our elders by carrying on that struggle. Don’t let their sacrifices be in vain. That’s why it’s important for all of us to be here today — to show that we’re together, that we’re unified, that we have that solidarity. And I hope to spend many more of these with you.” (source: Fox News [2])

He should leave the U.S. immediately, as I see it — and go somewhere else.

The guy has no loyalty to the country that gave him his bread and butter.

Spent the morning at the Indigenous People’s Sunrise Ceremony on the 50 year anniversary of the Occupation of Alcatraz. The US government has stolen over 1.5 billion acres of land from Indigenous people. Thank you to my Indigenous family, I’m with you today and always.✊🏽 pic.twitter.com/6cTuktUlQN [3]

History is an excellent teacher.

There is not a group or tribe or people that have not been overthrown, period.

That’s what gave birth to the USA.

We have our sins — but we are the only country that recognizes them and tries to do better.

Kaepernick should tell us where he would rather live!

He has every right to express his opinions, of course. This right is one of the things that has prevented the United States from being a totalitarian state.

For that, we have to be thankful.

Kaepernick also has the right to leave.

There is no doubt that Native-Americans got a raw deal. They have a right to address their grievances.

They have my support. Go for it.

Read more at WayneDupree.com:
Former Papa John’s Owner: They Stole the Company and Now They’ve Destroyed It [6]
Pro-Trump Tim Allen Goes into the Lions’ Den on ABC’s ‘The View’ and Shreds Political Correctness [7]
Melania Responds to Kids Booing and Her Response Is as Classy as She Is: ‘I Am Fighting For You’ [8]