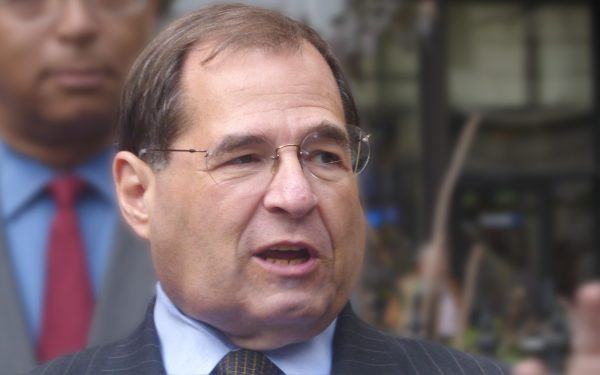 How seriously are the “somber” Democrats taking this impeachment sham against President Donald Trump?

You’ll recall that when Democrats announced they were drawing up articles of impeachment, they stood before the American people on television and lied, saying it was a “sad” and “somber” day and nobody saw it coming to this.

Give me a break.

We all know, as I see it, that Dems have been trying to impeach President Trump since the day he took office.

But, no — this was a “serious” and “somber” moment, according to Dems.

Well, they’re taking it so seriously that they’re either falling asleep (and drooling) during the hearing, as Chairman Jerry Nadler (D-N.Y.) did … (see the video in this tweet, below) …

This old fool is running the impeachment of POTUS. Good Lord you Dems must be proud of you sleeping drooling J. Nadler! pic.twitter.com/wupOHAuFLw [2]😂😂😂😂😂

… Or — they’re watching GOLF on their laptops, as Rep. Cedric Richmond (D-La.) was busted for doing on December 12.

These lawmakers are trying to interfere in the 2020 election by silencing American voters — and they’re so flippant about it that they’re sitting around watching the President Cup Golf Tournament during the hearing.

This is what we pay these fools to do.

It’s sickening to me.

You can watch the videos below:

This piece originally appeared on WayneDupree.com [6] and is used by permission.

Read more at WayneDupree.com:
Report: It’s Over! Roger Goodell Delivers Final Bad News to Kaepernick [7]
Newt Gingrich Floats Perfect Plan for What Must Happen to Adam Schiff After IG Report Proved He Lied  [8]
What These Californians Said About Trump’s Impeachment Will Leave You Shocked and Speechless [9]