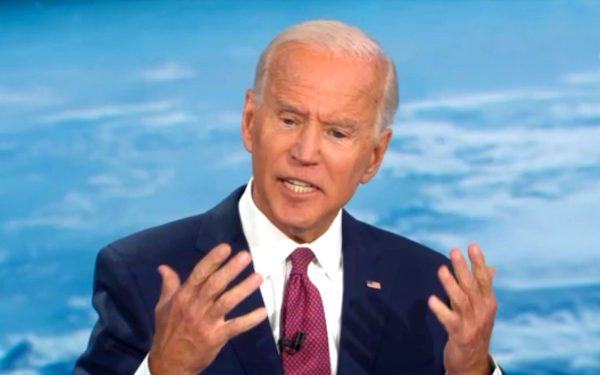 The latest gaffes and awkward comments and moments as committed by former Vice President Joe Biden [1] this week are among the top news stories right now.

There’s his “damn liar,” “fat,” “you’re too old to vote for me,” and “no one has ever said that my son did anything wrong with Burisma” [2] comments — not to mention the challenge-of-strength remark — all from one day, Thursday, during a campaign event in Iowa.

Related: Biden Loses His Temper at Elderly Voter in Iowa This Week [1]

There’s the “they like to touch my hairy legs” video clip about kids that resurfaced recently.

Biden apparently shared that story a few years ago.

There’s the moment from last Sunday when he tried to nibble his own wife’s finger during an Iowa campaign event.

It’s fascinating, by the way, that some on the Left think Biden’s show of “force” and “coherence” and even “bravado” during the Iowa event on Thursday — when he went face-to-face with an 83-year-old voter — was a good thing.

Most Americans recognize what happened as a weak moment, an aggressive moment — and that Biden, as a 2020 frontrunner [3], needs to be far better prepared and able to handle encounters, questions and confrontations with everyday Americans as these things occur on the campaign trail.

But all of the above is just the tip of the iceberg.

Here’s a list of 12 actual comments and instances involving Joe Biden [5], who is still, at this point in time, the 2020 Democratic frontrunner for the nomination. (But even this doesn’t include them all.)

1.) On November 20, he called Sen. Kamala Harris (D-Calif.) “the other one,” as he mistakenly bragged about being endorsed by the only black female ever elected to the U.S. Senate. That recalls a comment back in 2008, when he said of his then-future running mate, Barack Obama, “You got the first mainstream African-American who is articulate, bright, and clean.”

2.) Biden constantly forgets his location. On November 2, he told Iowa voters, “How many unsafe bridges do you still have here in the state of Ohio?”

3.) In South Carolina on October 26, to cozy up to an African-American crowd, he claimed to have attended a historically black college or university, saying, “I got started out at an HBCU, Delaware State … They’re my folks.” He never attended Delaware State; he studied at the University of Delaware and then earned a law degree from Syracuse University.

4.) During the third Democratic debate in September, Biden offered odd counsel on how to fight racism: “Play the radio, make sure the television — excuse me, make sure you have the record player on at night … Make sure that kids hear words.”

5.) Also in September, speaking about gun control, he said, “The idea that we don’t have elimination of assault type weapons, magazines that can hold multiple bullets in them…” There has never been a rifle magazine manufactured that holds only one bullet.

Related: Trump Charges That Biden Is ‘Not Playing with a Full Deck’ [6]

6.) On August 29, he made up a claim — the complete fiction of it reported by The Washington Post — that he went to Afghanistan as vice president. He only visited it in 2008, as a senator.

7.) He told a crowd at Dartmouth College on August 24, after repeatedly stuttering and forgetting where he was, “I’m not going nuts.”

8.) On August 10, Biden claimed to be vice president during the shootings that occurred Parkland High School in Florida. The tragedy occurred in 2018. He left office in January 2017.

Related: Biden Is Either Misremembering Recent History — or Lying [7]

9.) Biden said, “There are at least three genders” in answer to a question on August 9 in Iowa. When asked, “What are they?” he responded, “Don’t play games with me, kid … By the way, the first one to come out for marriage was me.”

10.) He told a gathering of Asians and Hispanics on August 8 in Iowa, “Poor kids are just as bright as white kids.” Earlier that day at the Iowa State Fair, he said, “We believe in truth over facts.”

11.) In the fall of 2008, Joe Biden told Missouri State Sen. Chuck Graham, “Stand up, Chuck! Let ‘em see you!” Sen. Graham is paralyzed and was in a wheelchair at the event.