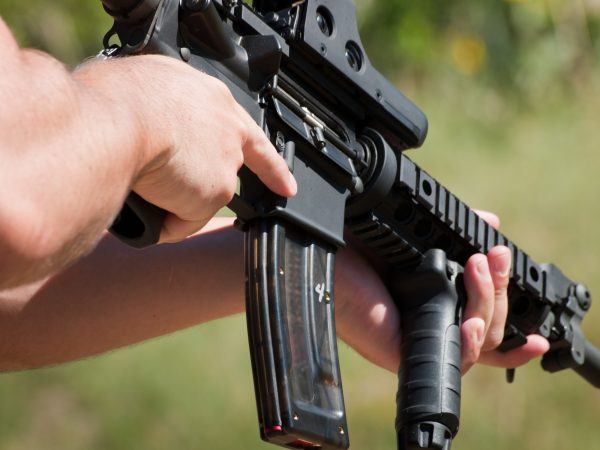 A pregnant mother last week used an AR-15 to protect her family from masked men who carried guns and invaded her home.

It sounds like the family did not even have time to call 911 until after the whole incident was over, it seems to me, though I don’t know for sure.

Thank God they are safe.

The Florida mother was eight months pregnant, according to reports.

She was fearless, absolutely.

A fearless mother protected her family when masked men, armed with pistols, invaded their home and began a brutal assault.

The mom, 8-months-pregnant, got her AR-15 and killed one of the men. “…[My wife evened the playing field and kept them from killing me,” the husband said. pic.twitter.com/GL37em7qul [2]

It is common that events like these are not reported widely because this does not go with the Left’s narrative of gun control.

“In the aftermath of a recent Florida self-defense shooting, female gun owners argued that the AR-15 provides specific advantages to women for home defense, vehemently rejecting the views of gun-control activists who insist the firearm is unnecessary,” The Washington Free Beacon [4] reported.

“Speaking with The Washington Free Beacon on Friday, five female firearm owners and advocates said the AR-15 platform offers several features that are ideal for women specifically. Robyn M. Sandoval, executive director of A Girl & A Gun Women’s Shooting League, said the rifle is both more effective and safer for female shooters,” the outlet [4] also reported.

“ARs are an excellent choice for women for home defense,” Sandoval told the outlet.

“The platform is relatively lightweight and easy to hold and customize so that the firearm fits her body correctly. Having a rifle that is the right size for the shooter makes it more comfortable to shoot and therefore more accurate and safer.”

In the earlier story up above, the Hillsborough County Sheriff’s Office noted that the AR-15 rifle was in the home legally.

It is a sad commentary that this had to be said at all.

It should not matter what firearm she used or that she owned one.

Good work, mom — and I applaud any female who is trained and is not afraid to use a weapon for home self-defense.

“AR-15s are perfect for women,” said Mary Chastain, a writer and gun owner, as The Washington Free Beacon [4] also reported.

“Despite the size, they are lightweight and have hardly any kickback. This allows us to aim well and shoot the target where we want to.”

Dana Loesch, a nationally syndicated radio host and gun-rights activist who has faced threats to her safety throughout her career, said she picks an AR-15 when it comes to home defense.

“I was always taught in training that your pistol is what you use to get to your rifle, and the AR-15 is what I choose to use,” Loesch told The Free Beacon [4].

I am pointing out that he was the former candidate.

We the people have a right to protect ourselves and our homes with whatever the job requires.

AR-15s should remain legal — and if you are a female, you shouldn’t be afraid to use one.

In the hands of a law-abiding citizen, the weapon stops criminals who might otherwise kill their victims.

Had the homeowner not had the weapon, a very different outcome would have resulted, in my view.