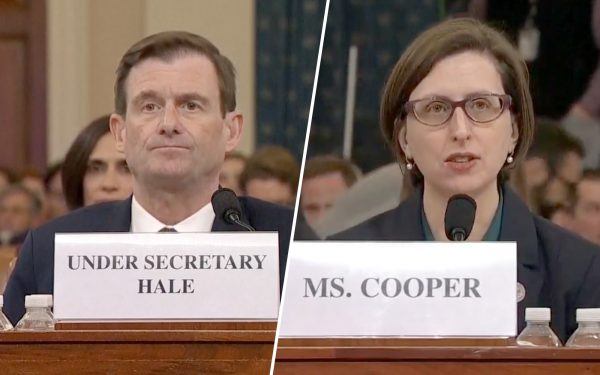 In a seeming slap in the face to his own counsel, House Intelligence Committee Chairman Adam Schiff (D-Calif.) changed the rules late on Wednesday to disallow any of the counsels from questioning the day’s final witnesses during the impeachment inquiry hearings.

Related: Exposed! Gordon Sondland Is Clear Trump Asked for Nothing of Ukraine [1]

Prior to the testimony of Under Secretary of State David Hale and Deputy Assistant Secretary of Defense Laura Cooper on Wednesday evening, Schiff likely felt that GOP counsel Steve Castor had scored vital points against the Democrat narrative during his cross-examination of witnesses.

After the failure of Army Lt. Colonel Alexander Vindman on Tuesday to stand up coherently to GOP counsel questioning [2] — and after Democrat counsel Daniel Goldman did not damage the credibility of Ambassador Kurt Volker or Tim Morrison, former National Security Council director — Schiff made the change.

By doing so, Schiff took Goldman out of the game — and Castor, therefore, was stopped from hurting the Dems any further.

As such, the session — after opening statements from Schiff and Ranking Member Devin Nunes (R-Calif.) — went immediately to the questioning of the witnesses by members of the Intel Committee.

Hale, in a brisk and efficient manner, had no opening statement and welcomed questions. Cooper, another officious D.C. bureaucrat who apparently felt duty-bound to tell the nation how wonderful she is, recited her resume ad nauseam. During her unctuous monologue, she seemed to this writer at least to be taking pauses for audience applause that never came.

During the questioning, Dems stayed on script and went for the bribery and obstruction of justice themes that will probably be the specific charges they make against President Donald Trump in an impeachment vote before the House committees and then the full House.

GOP members made a strong case that President Trump has been skeptical of foreign aid in general [1] not just during his presidency but even as a presidential candidate. They also pointed out that cuts to, or pauses in, foreign aid are made on a regular basis.

Over the last two years of the Trump administration, in fact, cuts and the cessation of assistance have been made in foreign aid to Lebanon, Pakistan, Honduras, and other nations for a variety of reasons.

Why did Schiff change the rules – DNC contacted his office about not eating Into debate time.#ImpeachmentHearings [3]

As opposed to earlier in the day and on Tuesday, the Wednesday evening round of testimony by 7 p.m. had produced no surprises or bombshells — which will make the proceedings further irrelevant to the American people.

However, the Dems are not playing to the American people.

They are playing to the hard-Left fringe of the Democratic Party that holds the entire party hostage to their extremist views.

The testimony and questioning continued until just before 8 p.m. — and resumes on Thursday.