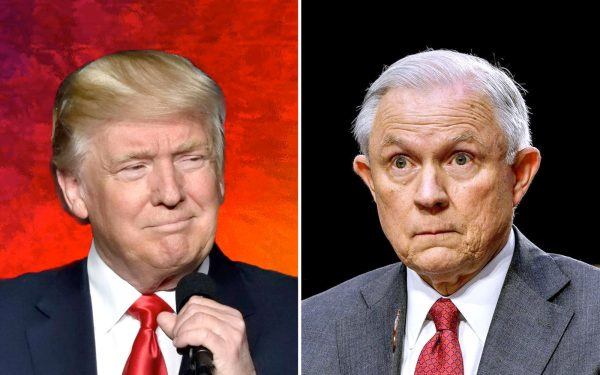 Update, Nov. 7, 2019, 9 p.m.: Jeff Sessions announced his candidacy for the Senate on Thursday night in a statement [1] and on Fox News’ “Tucker Carlson Tonight.”

The president is not one to forget easily.

When President Donald Trump in 2017 nominated Jeff Sessions, then a GOP senator from Alabama and one of his earliest supporters, to be attorney general, he surely thought it would work out well.

Sessions left the Senate to take the post — then recused himself on the Mueller investigation into the Russian hoax and let the Dems run roughshod over Trump on the fake issue.

Then his ultra-safe Alabama Senate perch was lost after a divided GOP nominated alienating firebrand and hard-Right Judge Roy Moore in a special election for the seat.

Moore managed to take a sure thing and run it right into the ground.

Thus in December of 2017, Democrat Doug Jones [3] won election to the Senate in the darkest red-of-red states to fill out Sessions’ term.

So you can see why President Trump might hold a grudge.

But now, to open up the wound again, Sessions appears likely to announce his campaign [2] to take back his old job on Thursday night’s “Tucker Carlson Tonight” on Fox News.

The reaction from his old and potentially new Senate colleagues has not been overwhelmingly positive.

“McConnell…has been less than thrilled with the idea of a Sessions candidacy, according to two people familiar with his thinking. He views it as a distraction that could end poorly for Republicans…” https://t.co/hrwBgjSvcW [4]

GOP leaders and the president are afraid a contentious Alabama GOP primary field could hold open the door once more for Moore — who is also running.

The Moore vote is not a majority, but it is highly committed.

In a moderate turnout primary race, with many carving up what’s left after Moore’s likely solid 30 percent to 35 percent, Moore could slip in and could lose again to Democrat Doug Jones [3].

That — and Trump’s memory of Sessions’ timidity during the initial stages of the Mueller investigation — could make the president intervene in the primary against Sessions.

And perhaps even against Moore.

That puts very conservative Alabama GOP voters in a quandary.

And what if Moore gets the nod again?

Best move, in this writer’s opinion?

Entice Jones over to the GOP with choice committee assignments and expedited seniority. Then he can run as an incumbent with Trump’s blessing — and clear the field in a primary.

No doubt Senate Majority Leader Mitch McConnell (R-Ky.), who is known for his craftiness and savvy, is contemplating such moves and likely more right now.