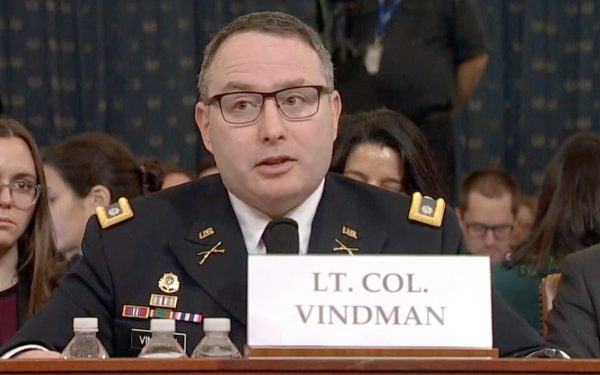 In Tuesday afternoon questioning in front of the House Intelligence Committee as part of its ongoing impeachment inquiry into President Donald Trump, Army Lt. Colonel Alexander Vindman — in an astonishingly partisan political performance for a serving member of the military — wilted under tough and sustained questioning from GOP Reps. Jim Jordan of Ohio, Chris Stewart of Utah, and Elise Stefanik of New York [1].

But since both Schiff and Vindman claim not to even know the name of the informant, Jordan pointed out, logically, how could they know if they were revealing the name or not?

Vindman’s nervous response and Schiff’s recurring interventions to gag any reference at all to the informant did not bode well for Vindman’s fate at the hands of the Republicans.

Rep. Chris Stewart (R-Utah) took over from Jordan. In the direct style he’s become known for, Stewart called out Vindman.

He asked the serving officer if the president was in the armed forces. Vindman had previously said he took the president’s concern about corruption in Ukraine as a Trump order to Zelensky, just as he would in the military if a superior officer had expressed a concern.

Vindman said no to the question.

Stewart then asked if Zelensky was in the military.

So why, then, Stewart asked, was Vindman interpreting the two presidents’ conversation through the prism of military structure?

When Vindman attempted a weak defense on untenable ground, Stewart — a military vet from a military family — was waiting for him.

“I think that’s nonsense,” said Stewart. “That’s not true at all,” he added.

He compared the dearth of evidence against the president — after getting Vindman to admit that trying to influence the Ukrainians on internal matters was wrong — to the on-camera bragging of then-Vice President Joe Biden [2] regarding how he, Biden, got a Ukrainian prosecutor fired for looking into Burisma and his son, Hunter Biden.

At this line of attack, Vindman was again silent.

So, said Stewart, even theoretically conceding Vindman’s point, “What’s wrong for the president to do [what] was OK for Biden?”

Rep. Elise Stefanik (R-N.Y.) [1] then bored in on a host of issues. She first went after the biased news coverage of the inquiry.

She nailed Schiff’s fear of information getting out about the informant. Then, as a coup de grace, she got Vindman to say that Hunter Biden’s dealings with Burisma had “the potential for the appearance of a conflict of interest.”

Vindman tried to qualify his statement and chose his words carefully so as not to injure his meticulously constructed Dem narrative. But the point came across loud and clear: A vice president’s son’s receiving over $1 million from a corrupt foreign firm his father was the administration’s point man on was not kosher in appearance or ethics.

The ball came back to Rep. Jordan’s court and he did not disappoint.

He reiterated that the transcript of the July 25 phone call between the two presidents had been made public for all to see, much to Democrats’ dismay, and that Zelensky said he felt no pressure or quid pro quo on any issue during the call.

Jordan reminded Vindman that the Ukrainians at that point did not even know military aid was being withheld.

So, Jordan asked, how do you have a quid pro quo when the party on the receiving end does not know he’s being pressured?

Despite shills in the audience likely instructed to clap on cue for Vindman, Jordan closed with, “Facts are on the president’s side. This process is not.”

If any statement encompasses all of these hearings so far, it is that one.

Stay tuned for more coverage of the House Dems’ hearings this week.