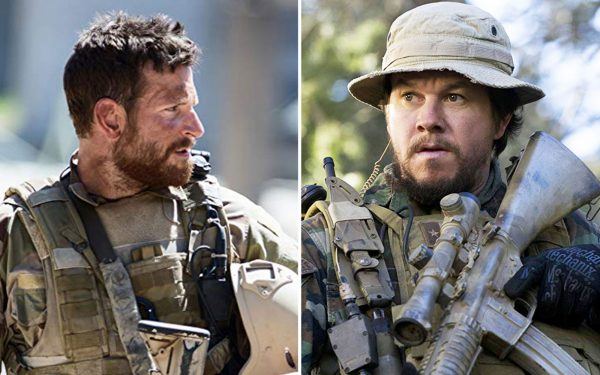 Every veteran has a story.

Some are harder to hear than others.

Some can make us laugh.

Some can make us cry.

Some can inspire us.

Our country’s military is made up of a wide variety of individuals — and each person who chooses to wear the uniform in a country based on freedom deserves to have his or her story told.

Veterans Day is a great time to speak with veterans we know so that they can pass along their stories to us — although many often keep those close to the vest, as they tend to be private, proud and quiet about what they’ve done.

Related: Veterans Mental Health Care May Finally Be a Priority [1]

Even so, it’s an opportunity for Americans to recognize the sacrifice that men and women in all branches and at all levels in the military make.

Here is a look at seven films that do a great job of saluting this country’s too-often ignored and forgotten veterans.

It should be noted that five of these seven are rated R. These tell tough tales — so most of what’s here is not for children.

1.) “American Sniper” (rated R).  This film became a cultural phenomenon when it was released in 2014.

The biopic of late Navy SEAL Chris Kyle went on to become one of the highest grossing R-rated movies of all time. It also got caught up in a Left-versus-Right debate that really missed the point of the film.

Many leftists claimed the movie was xenophobic and pro-war. The movie is actually a modern version of Clint Eastwood’s “Unforgiven,” a deconstruction of the western world and a contemplation on violence and violent men.

Chris Kyle is ultimately a man who went further than most for his country; he had to make a long journey to a place where he knew what meant most in life: family. His story is about man’s relationship to war. It’s an inspiring tale of how one extraordinary veteran embraced civilian life and helped other veterans who were going through struggles.

Bradley Cooper (pictured above left) stars as Kyle, a man who joins the Navy SEALs and becomes a top sniper. His journey through the years in the War on Terror depicts the many different attitudes veterans have had toward the evolving crisis in the Middle East. The film never gets political, though.

Viewers never feel an entertainer is preaching. We instead hear the authentic voices of men and women sacrificing in the name of this country.

Kyle’s journey to the giving and loving place he arrived at near the end of his life is a gripping tale.

Eastwood, a veteran himself, treats Kyle and other veterans with respect by treating them like human beings with opinions and emotional journeys and realizations. “American Sniper” is a raw look at not only war but also at the men and women who serve.

2.) “Lone Survivor” (rated R). Director Peter Berg and actor Mark Wahlberg have worked together a number of times since this hit 2013 movie. “Lone Survivor” was such a successful team-up that they made “Deepwater Horizon,” “Patriots Day,” “Mile 22,” and HBO’s “Ballers” together. They also worked on “Wonderland,” a thriller out on Netflix this year.

“Lone Survivor” is based on the true story of Marcus Luttrell, a former Navy SEAL who was the only man in his team to survive after a 2005 overseas incident — one of the most tragic to come out of the War on Terror, but also one of the most harrowing testaments to the strength and dedication of the men and women who represent this country in the military.

Wahlberg (pictured above right, as Luttrell) gives one of his best performances. The camaraderie between him and the other men has a more authentic feel than most movies about Navy SEALs. This likely comes from the fact that Luttrell — whose autobiography inspired this film — was involved with this movie every step of the way.

“Lone Survivor” is one of the most honest depictions of the War on Terror in film; the cast and Berg and his crew give an honest and mighty salute to this country’s veterans.

3.) “Last Flag Flying” (rated R). A spiritual sequel to 1973’s “The Last Detail,” Richard Linklater’s “Last Flag Flying” brings two generations of veterans together — those who served during the Vietnam War and those who choose to serve in the ongoing conflict in the Middle East.

Steve Carrell (“The Office”) stars as as a former Navy corpsman who recruits two old battle buddies to help him in a task no father should ever have to complete. He needs to take his son, who died while serving overseas, home to be buried.

On the surface, “Last Flag Flying” is a melancholy film about loss and the price of war. However, beneath that, in the quiet moments of the performances and between the lines of dialogue, there is a story about the bonds that service creates between men and the ability for veterans to honor and help one another, even years after their service is complete.

This is a powerful film, one that is certainly a difficult watch at times. But real insight and honesty can be found here. The lead actors show how quick and layered veterans actually are; Linklater has some pretty great messages about each generation’s relationship to its wars and the price the silent victims of war pay all too often.

For a bonus, turn this into a double feature with “The Last Detail,” the fantastic film that starring Jack Nicholson and Randy Quaid from which this film takes its inspiration.

4.) “Not a War Story” (rated R). [2] This documentary is truly like no other. It follows the making of the independent action film “Range 15.” What’s unique about the movie is it was made mainly by veterans.

Tired of being defined by their service or injuries or valor, these veterans decide to use their experience and injuries to create the types of films that kept them entertained while they were overseas during their service. This one happens to be about a zombie apocalypse. Some stars stop by the set to help out — such as William Shatner and Danny Trejo — and watching them connect with the veterans on set shows the exact kind of connections civilians should be making to veterans every day.

The blood, sweat and tears put into this film also shows the unbreakable camaraderie of service, the humor of brotherhood, and the passion and work ethic many veterans are instilled with, thanks to their time in the service.

“Not a War Story” is a funny and eye-opening film that everybody should watch.

“It’s not about a movie. It’s about the military community coming together in a way that most of us haven’t done since we wore the uniform. We needed this project as a community. It was the impossible task,”producer Nick Palisciano told LifeZette about the unique film in a 2017 interview [2]. “To go from no Hollywood experience and no money to raising $1.5 million and shooting a movie with William Shatner, Keith David, Sean Astin, Randy Couture, and Danny Trejo and then hitting the top of the charts on iTunes and Amazon — you either needed the military community or John Wick. John was unavailable.”

5.) “Thank You for Your Service” (rated R). [3] This Miles Teller-starring film flew under the radar when it was released in 2017. It earned strong reviews but audiences mostly ignored it. That’s a shame, as it’s an honest and powerful piece of work.

What should sell people on this movie is the fact that it was written and directed by Jason Hall, who previously scripted Clint Eastwood’s “American Sniper.”

With “Sniper” and this film, Hall did his research; he spent a lot of time around people who have served — the on-screen work shows this in spades. “Thank You for Your Service” follows the journey of three veterans of the Iraq War (lead by Miles Teller) as they head home and try to reintegrate into civilian life.

It’s a simple but honest story, one that manages to show the details of a veteran’s struggles usually glossed over in more action-oriented fare. The struggles of the VA (Veterans Affairs) has never been shown more honestly — and Teller and the cast show real spark. They’re young men struggling to do the same things the rest of us struggle with on an everyday basis, thus showing that our country’s vets are not a group to be judged by stereotypes or cliches; they’re instead to be respected as individuals well beyond their military uniforms.

6.) “Unbroken: Path to Redemption” (rated PG-13). For those dissatisfied with Angelina Jolie’s 2014 film “Unbroken,” Pure Flix released a spiritual sequel in 2018 that adjusted some of the flaws of the first movie.

While Jolie’s “Unbroken” was well made, it ignored one of the biggest parts of late veteran Louis Zamperini’s story. Zamperini was not only a track star who became a prisoner of war during World War II and survived dozens of days at sea after his plane crashed. He was also a man who found peace when he accepted Christianity after attending a speaking event by the late Billy Graham.

The movie, which stars Samuel Hunt as Zamperini, tells of one of this country’s most interesting and powerful veterans. Zamperini experienced more darkness than most, but he later found light in faith and family. He chose to set his anger aside when he said he forgave the man who viciously tortured him.

Zamperini’s tale is inspiring; and telling this part of his life helps us understand the man more.

7.) “Indivisible” (PG-13). This is the true story of Army Chaplain Darren Turner. The film is the story of a man and his wife reigniting their faith in order to reignite their love and relationship.

It’s not only a story of overcoming past pain, but also of how much veterans have to give — and how strong a relationship can become after being truly tested. And unlike the other films on this list, you can actually see this one in theaters. It was released in the fall of 2108.

A version of this article appeared earlier in LifeZette.