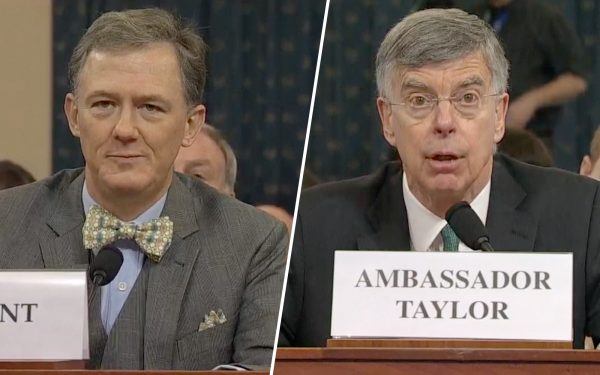 Acting Ambassador to Ukraine Bill Taylor (shown above right) gave his opening statement on Wednesday morning during live, televised impeachment inquiry hearings held by the House Intelligence Committee, which is run by Rep. Adam Schiff (D-Calif.) — and he started off recounting his resume, including his background as a West Point graduate and Army Infantry officer in Vietnam.

This was to wrap himself in the American flag, in my view, to ward off any upcoming GOP attacks.

He claimed to be non-partisan — and further gave a report on the current security situation in Ukraine.

Early on, at least, he came across as credible and telegenic, as George Kent — the deputy assistant secretary of state for Europe and Eastern Europe — did not during his opening statement.

Adamantly anti-Putin, Taylor condemned the Russian invasion of the Donbass region of Ukraine.

Taylor also shrewdly understated his arguments to increase his appearance of gravitas and inoculate himself against any charges of partisanship.

But Ranking Member Devin Nunes (R-Calif.) and Rep. Jim Jordan (R-Ohio) are unlikely to be fooled once they get a shot at questioning him.

Taylor brought up Rudy Giuliani, the president’s personal lawyer, staying right on the Democrat script — and defended Marie Yovanovitch, the Trump-fired former ambassador to the Ukraine.

Taylor asserted that an “irregular, informal” diplomatic channel outside of the White House “operated outside of regular, diplomatic” procedures.

He also contended that he personally concluded, after talking to an Office of Management and Budget staffer, that a planned White House meeting with Zelensky and further military aid was conditioned on an Ukrainian investigation into Burisma.

And Taylor said he was very concerned about the hold — calling it “folly.”

He said he expressed specific doubts about the policy to John Bolton — and called it “crazy” in his testimony and in a text he sent earlier.

Importantly, though, at no time during Taylor’s statement did he claim any firsthand knowledge of the supposed military hold.

His testimony, thus far, has been almost all secondhand information.

He charged that Giuliani undercut U.S. diplomatic efforts to aid Ukraine in defense against Russia.

And Trump, according to Taylor, was “adamant” that Zelensky investigate Burisma — and publicly say so.

But Trump said this “was not a quid pro quo.”

On September 2, the hold was apparently lifted and Taylor informed Zelensky of the move.

Since Taylor’s recollections on this situation were of only a period of less than a week — any alleged hold happened only for a matter of days.

Taylor claimed later in September a member of his staff was told President Trump “cared more” about the “investigation” than in military aid to Ukraine.

Booming voice notwithstanding, Taylor often claimed he “believed” or “felt” that certain things were happening — or that they “seemed” to be, as he understood it.

Taylor stayed right on the Dem script — and did so adeptly.

Schiff questioned Taylor only briefly after the opening statement and then turned matters over to attorney Daniel Goldman, the legal counsel for the committee.

It’s certain that this Taylor testimony will be promptly pounced on by Republicans as soon as they get the opportunity for questioning.

Nunes is right. This is a highly coordinated sham against President Donald Trump.