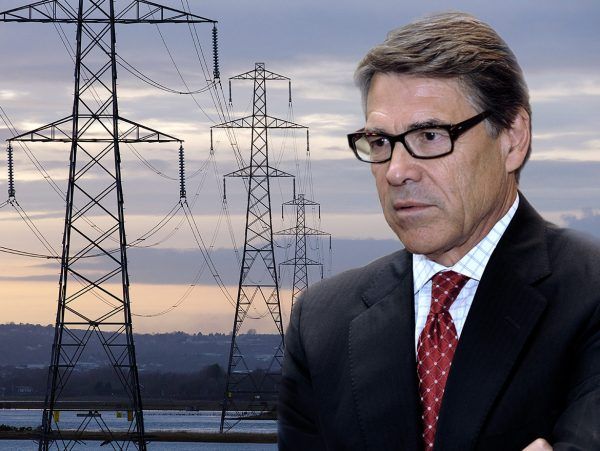 Rick Perry, the secretary of Energy for the Trump administration for the past three years, spoke with Ed Henry of Fox News [1] for a two-part interview that aired this weekend.

The first part aired on “America’s News Headquarters with Ed Henry” on Saturday; the second was shown on Sunday.

In the latter segment, Perry was open about God, his faith, his belief in the Almighty and the role he is convinced President Donald Trump is playing as a “chosen” one for this time in the country’s history.

Here are excerpts from his faith-focused comments to Henry of Fox News [2].

“None of us got here by accident. I’m a big believer that the God of our universe is still very active in the details of the day-to-day lives of government. You know, Barack Obama didn’t get to be the president United States without being ordained by God. Neither did Donald Trump.”

“I happen to believe that God’s used, you know, individuals who aren’t perfect all through history. Donald Trump [3]‘s not perfect. And I think the Christian teachings and the Christians that are around him in his Cabinet and in his life are very important. And I hope I’ve been a bit of a minister, if you will, a person who’s been able to share my faith with the president.”

“Here’s what I tell people. I say, “Listen, you know, again, God’s used imperfect people all through history. King David wasn’t perfect. Saul wasn’t perfect. Solomon wasn’t perfect. And I actually gave the president a little one-pager on those Old Testament kings about a month ago.”

“And I shared with him, I said, ‘Mr. President, I know there are people that say, you know, You said you were the chosen one.’ And I said, ‘You were.’ I said, ‘If you’re a believing Christian, you understand God’s plan for the people who rule and judge over us on this planet, in our government. You were. You didn’t get here without God’s blessing.’ And I said, ‘I just need you — I want you to look at this. I want you to read it. I want you to, you know, absorb that you are here at this chosen time because God ordained it. And now don’t get confused here, sir. This is not a reflection that you’re perfect … but that God’s using you.'”

“And He uses all of us that way. And I think that’s my message. And, you know, I believe it.”

He also said his faith has “not been tested” by his time in Washington — that his faith remains solid.

And that “God’s plan sometimes is not [our] plan.”

Perry, a former governor of Texas before he joined the Trump administration, is stepping down in a few weeks from his current post.

In the earlier segment that aired on Saturday, Perry, in part, said he believes the president “will muscle right on through” the impeachment spectacle that’s been going on.

“He is an extraordinary individual to stay focused and disciplined,” added Perry, “from the standpoint of, you know, ‘We got a mission here and we’re going to get through it, and we’re going to make this happen.'” He said he does not see “the American people buying into this thing.”

“Do you see any chance the Republicans remove him from office?” asked Henry.

When the conversation moved to climate issues, Perry explained, “I like to tell people that this administration … in the first two years of this administration, we spent more money on renewable energy than the previous administration in their last two years. We increased the budget of our national labs by 43 percent. And a lot of that goes toward, you know, technologies, the National Energy Renewable Lab.”

“But here’s what’s most important,” he added. “Because this president understood that American LNG [liquified natural gas] could really impact the emissions issue in Europe, and he basically said, ‘I want you to go sell LNG like the world looks flat. Go, go get this done.’ Here’s what he said when I was sitting in his office getting interviewed back in December of 2016. He said, ‘Perry, here’s what I want you to do. I want you to go do for American energy what you did for Texas.'”

“We’re selling American LNG now into 36 different countries on five continents,” Perry continued. “The Europeans saved $8 billion last year because American LNG and the competition it brought to the market over there against Russian gas — not only are they not held hostage by Russian gas, they’re also saving money. Americans, Americans, because of the shale revolution — over $200 billion saved last year.”

“You do the math on that. That’s, for a family of four, that’s about $2,500 a year that Americans saved because of the regulations and taxes that basically said, in this case, to the fossil fuel industry, ‘Go out there and develop this.’ And they have. Here’s the result. Our emissions are lower than any country that’s a signatory to that Paris agreement. Our emissions are back down to the same levels that we had in, I believe, 1987, energy-related emissions. That’s a good story.”

Henry also asked Perry about the Democrats who are running for the 2020 nomination against Trump [4].

“What do you see when you look across at the Democrats?” asked Henry. “They had another debate last night [meaning this past Wednesday night, in Atlanta]. You’ve been through this, as you say, a few times.”

Said Perry, “I hear too many people talking about, ‘If you vote for me, here’s what I’ll give you — free, free, free, free.’ I think there’s a TV ad that says that, isn’t it? I don’t know what they’re giving away for free. There are no free lunches; stuff costs.”