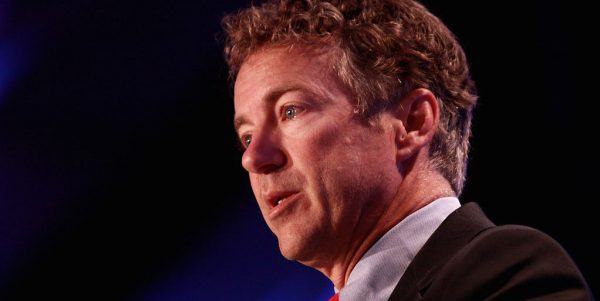 Sen. Rand Paul (R-Ky.) has not always been the strongest defender of President Donald Trump.

In the 2016 GOP primaries, the two men crossed swords more than once.

But since then, Paul has warmed to the president’s pro-free market philosophy and non-interventionist foreign policy.

That friendly relationship was on full display on Monday night at the Rupp Arena in Lexington, Kentucky, as Paul — called up to the podium by Trump during the raucous 2020 campaign rally [1] — slammed Democrat impeachment mavens as well as the media.

The senator urged Congress to back the president, charged members of the media with not doing their jobs in disclosing details about the so-called whistleblower, and specifically claimed that Hunter Biden. son of the former vice president, received money from the rich and powerful of foreign countries.

The crowd in Lexington loved every word of it.

“President Trump has great courage. He faces down the fake media every day,” declared Paul.

“But Congress needs to step up and have equal courage to defend the president … He [the informer] worked for Joe Biden at the same time Hunter Biden was getting money from corrupt oligarchs. I say tonight to the media, do your job and print his name.”

Public reaction was fast and positive.

See this tweet, for example, from Diamond and Silk — who are outspoken and steadfast supporters of President Trump.

The leaker in D.C. has legal protection against public exposure under federal law — though his name and job are open secrets in D.C.

The man’s allegations are of such a serious nature, and his conflict of interests and bias so compelling, that hiding behind his Democrat handlers not only deprives the president from due process but shields the rumored former Dem operative from any cross-examination by unbiased media (if one could find any) and GOP members of Congress.

President Trump was gratified by Paul’s remarks and called him a “warrior” and a “great friend.”

After Paul finished his speech, the president commented, “Wow, that was excellent. Wow, thank you.”

Trump himself had essentially tweeted the same themes earlier in the day.

The Whistleblower gave false information & dealt with corrupt politician Schiff. He must be brought forward to testify. Written answers not acceptable! Where is the 2nd Whistleblower? He disappeared after I released the transcript. Does he even exist? Where is the informant? Con!

Not everyone shared in the sentiment, however.

Trying to force the free press to reveal the secret identity of a citizen. That’s extremely libertarian of you, Rand!

The president traveled to Kentucky on Monday night to bolster the chances of incumbent GOP Gov. Matt Bevin, who is in a tight race with Andy Beshear, the Democrat state attorney general.

Tuesday is Election Day in Kentucky — and in a few other states as well.

Kentucky, Virginia, Mississippi and Louisiana all have statewide elections that could be bellwethers of the president’s political strength and popularity going into the 2020 election.

Republicans are expected to do well, as all except Virginia are considered deep red states.

Dems in those states, however, know how to run to the middle and even to the Right in general elections.

So, some surprises could be in store.