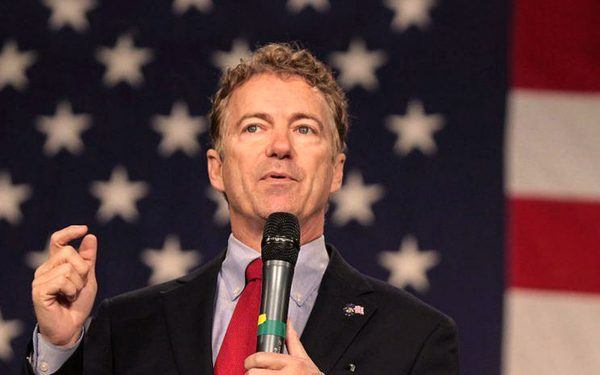 Sen. Rand Paul (R-Ky.) [1] hit a reporter with the facts on Tuesday after she claimed his call for the media to “out” a whistleblower whose complaint led to an impeachment inquiry is illegal.

“Actually, you see you’ve got that wrong, too,” Paul responded.

The reporter insisted she was right in saying it was illegal, firing back, “No, we don’t.”

But Paul, unbowed, wasn’t about to let that slide.

“You should work on the facts,” the Kentucky Republican said, stopping for emphasis.

“The whistleblower statute protects the whistleblower from having his name revealed by the inspector general. Even The New York Times admits that no one else is under any legal obligation.”

The Republican lawmaker went on to explain that the whistleblower, identified in The Political Insider as CIA officer Eric Ciaramella [6] — a registered Democrat who worked with former Vice President Joe Biden and former CIA Director John Brennan — is a material witness in the inquiry who needs to answer some questions.

“The other point, and you need to be really careful if you really are interested in the news,” Paul told the reporter, “is the whistleblower actually is a material witness completely separate from being a whistleblower because he worked for Joe Biden at the same time Hunter Biden was receiving $50,000 per month.”

“So the investigation into the corruption of Hunter Biden involves this whistleblower because he was there at the time,” Paul continued.

“Did he bring up the conflict of interest? Was there a discussion of this? What was his involvement with the relationship between Joe Biden and the prosecutor? There are a lot of questions the whistleblower has to answer.”

Paul then proceeded, on his Twitter feed, to take down the media argument that the whistleblower is entitled to protection from the press.

In recent centuries, common law tradition and our very own Bill of Rights require accusers to appear face to face.

Advice from Mark Twain re: the Bocca di Leone of Venice: “These were the terrible Lions’ Mouths….

Whistleblowers are guaranteed protection from the repercussion of being fired, but the statute does not forbid anyone, other than the Inspector General, from revealing the whistleblower’s name. https://t.co/0ALuq49FLi [8]

It’s remarkable to watch the entire mainstream media run cover for the whistleblower.

If the roles were reversed, and there was a material witness filing a complaint against Rep. Adam Schiff (D-Calif.) or House Speaker Nancy Pelosi (D-Calif.) — and it could lead to their removal from office — then you know quite well that the Democrats would have already outed that person.

And the media would have obediently followed suit.

Instead, Ciaramella is being hidden by liberals in politics [10] and every major news network is … obediently following suit.

Our question is: See a theme here?

Every formerly respected journalist is now no better than the ladies of “The View,” in our opinion, who spent part of their show early this week accusing Sen. Paul of being “crazy” and “forgetting” the rule of law.

Paul continued pressing the media to reveal the whistleblower’s name, as it is their job to do so — but explained that he might just do it himself in the near future.

“I’m more than willing to, and I probably will at some point. … There is no law preventing anybody from saying the name,” he said.

Any mainstream reporter would have a bombshell on his or her hands if that person simply reported the facts.

Instead, these reporters walk in lockstep with the Democrat Party and their demands.

It’s pathetic, as we see it.