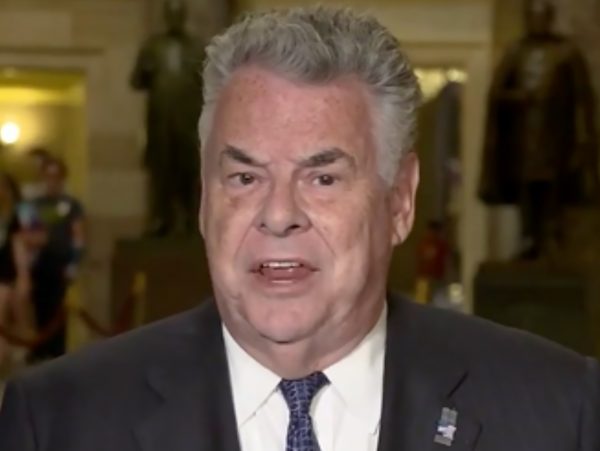 Rep. Peter King (R-N.Y.) told Fox News’ Martha MacCallum on “The Story” on Tuesday evening that he would not be seeking re-election going forward because, in part, there were “28 years of spending four days a week down in Washington. I loved every minute of it — don’t get me wrong,” but it was time, he said, to consider spending more time closer to his family.

It was his first interview since he announced his retirement early this week.

He represents a South Shore, Long Island, district and will have served 30 years by the time he retires.

“Again, it was great, so long as they were nearby,” he added. “But now, to have to, you know, work out travel and everything, and — maybe it sounds trivial,” he added. “But to me, that was sort of [what] put it over the top.”

MacCallum [1] quickly switched to another issue — this one involving Rep. Ilhan Omar (D-Minn.).

Omar rudely tweeted “good riddance” to King after he announced he’s retiring — and accused him of being an “Islamophobe” because of past hearings he held on radical Islamic extremism back when he was chair of the House Homeland Security Committee.

Here’s the tweet she put out yesterday about him.

Peter King is an Islamophobe who held McCarthyite hearings targeting American Muslims, said “there are too many mosques in this country” and blamed Eric Garner for his own death at the hands of police.

He vehemently defended himself from the charges by the left-wing member of the so-called Democratic squad.

“My concern,” said the congressman, “was her political correctness was getting in the way of counterterrorism and solid law enforcement. When we went after the Mafia, we went to the Italian American community. When we went after the Westies, we went to the Irish-American community. The fact is that radical Islamist extremists were in the Muslim community. Maybe it’s 1 percent, less than 1 percent of the population. But we had a situation where it was considered politically incorrect to carry out ordinary surveillance — and police all over the country were telling me they were not getting the cooperation from within the Muslim community that was needed.”

Related: Oh, Omar! Claims She Loves This Country More Than Those Born Here [4]

“And people talk about this being an anti-Muslim hearing,” he added. “The key witnesses there testifying for me — two of them were Muslims and the other was an African-American whose son had converted to Islam and had been taken over to Somalia to fight for Al-Shabab, but when he wanted to come home … he ended up killing American military. The other person, Mr. Bihi — his son did go to Somalia and he was killed over there and when he was warned and threatened by people in his own community in Congresswoman Omar’s district, by the way, not to cooperate, not to talk to the FBI, not to talk to the police, and I wanted to give him an opportunity to come forward. So that’s was this was about.”

MacCallum then mentioned that King, during his career, has “worked very hard, obviously, to defend the first responders from September 11 to make sure that they got the funding they need for their health. Do you worry that, you know — who’s going to carry that torch for you when you leave here? And do you see it translating perhaps into another office for you?”

Said King, “No. As far as that, I’m now fairly confident that when the president signed the bill at the end of July of this year, that carries the victims’ compensation fund all the way through to 2090. So, that was really the final hole we had to close. That’s been done.”

“And getting back to Congresswoman Omar — like when she says I said there were too many mosques — I never said that. I said there were too many mosques who were not cooperating with law enforcement, and it was in her district that a young man was seduced to go over to Somalia and was killed — and then the good Muslims in that community were warned not to cooperate with law enforcement.”

“No. That was never a factor. In fact, [in] the last polling I did just a few months ago, I was winning by 30 points. Now, I wouldn’t have won by 30 points on Election Day, but my favorable moments were the highest ever.  We put me up against two possible contenders … I beat them, one by 30, the other one by 31 points, and I think the district can be held. It’s right now becoming a swing district. President Trump did carry it. President Obama carried it twice. Then President Trump carried it by 9 points — and it can be done [again].”

Said MacCallum, “Michael Bloomberg worked very closely with you on first responder issues. He’s thinking of throwing his hat in the [2020] race. Would you be supportive of that?”

Share your thoughts — and see Rep. King’s message about why he’s not seeking re-election.

I have decided not to be a candidate for re-election to Congress in 2020. I made this decision after much discussion…