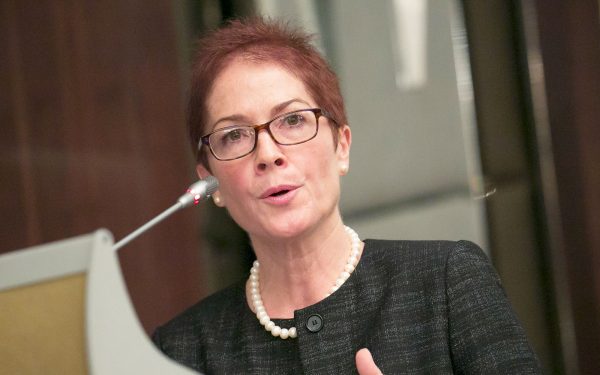 Rep. Devin Nunes (R-Calif.), the ranking member of the House Intelligence Committee, on Friday questioned why Marie Yovanovitch, former U.S. ambassador to Ukraine, was even called to testify by Democrats during the public House impeachment inquiry. [1]

Said Nunes, “I don’t really have that many questions for you.”

“You admitted in your opening statement that you don’t have any firsthand knowledge of the issues that we’re looking into,” he also said to her.

“I’m not exactly sure what the ambassador is doing here today,” he added.

“This is the House Intelligence Committee — which has now turned into the House Impeachment Committee,” said Nunes.

“This seems more appropriate for the subcommittee on human resources at the Foreign Affairs Committee if there are issues with employment and the administration … instead of an impeachment hearing where the ambassador is not a material fact witness.”

Yovanovitch admitted she had no firsthand knowledge of President Donald Trump’s [2] committing any “high crime or misdemeanors.”

She acknowledged that he had lost confidence in her — but that is not a high crime or misdemeanor.

So why is Chairman Adam Schiff (D-Calif.) wasting the time of the American people with this nonsense?

Yovanovitch was a willing participant in a campaign of disinformation, as I see it.

She was briefed before her Senate confirmation in 2016 that any questions she received referring to the Bidens and Burisma were to be referred to then-Vice President Joe Biden’s office.

She, no doubt, had been through ethics training and recognized an apparent conflict of interest concerning investigations into Burisma’s payments to Hunter Biden, as I see it.

Related: 10 Striking Reactions by Everyday Americans to the Impeachment Hearings [1]

When Biden’s incriminating video demonstrated a coerced quid pro quo to fire the prosecutor who was investigated Burisma, she knew that an investigation of American corruption in Ukraine was coming.

She appeared to be supporting the Democratic Party’s efforts to prevent an investigation from continuing.

I do not doubt she is upset about her career being marred after her unwillingness to report an apparent conflict of interest involving Burisma and the Biden family.

The shoe will be on the other foot, and Schiff is going to be crushed — that’s my prediction.

See the video above via Fox 10.