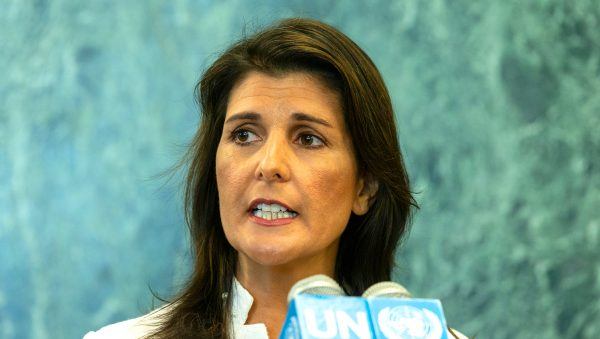 Nikki Haley, former ambassador to the United Nations for President Donald Trump, appeared on the Fox News Channel program “Hannity” on Monday night to discuss not only her new book — but the current House Democrats’ impeachment moves against the president.

She shared her firm beliefs that the president has done nothing wrong to warrant such a partisan and political move against him [1].

Public hearings are scheduled to begin on Wednesday this week.

“I said before, you look at the transcript — it’s very clear the president was not demanding that this be done,” Haley said to Sean Hannity, referencing the July 25 phone call Trump had with the Ukrainian president.

“The Ukrainians didn’t do the investigations … I don’t think it’s good for us to ever ask foreign governments to investigate Americans, but I think it goes to the fact that Americans should be investigating Americans,” she said.

“There have been a lot of investigations that have been very one-sided against the president and they haven’t been looking at the other side — which is all of the other issues and you know, whether it was the Russian situation,” she said.

Related: ‘With All Due Respect, Nikki Haley Calls Out the Anti-Trumpers’ [1]

Haley also responded to one excerpt in her new book in which she detailed how former Secretary of State Rex Tillerson and former White House Chief of Staff John Kelly privately resisted the president — and took her aside, hoping she would join them in going against Trump.

She discussed her strong working relationship with Trump and said, “I do think he’s misunderstood.”

Her new book is, “With All Due Respect: Defending America with Grit and Grace.”

Haley, a former governor of South Carolina, was among Trump’s first appointments in the White House; she was confirmed four days after he took the oath of office. Haley had been a firm and articulate voice at the United Nations on behalf of Trump’s “America First” approach to foreign policy. She resigned from her position in October 2018 [2].

She said on “Hannity,” “Well, I did tell the president [about how Tillerson and Kelly had approached her about going against Trump]. And, I mean, keep in mind, Sean, this is one page out of 250 pages of the book.”

“But I did tell the president, and I did tell the National Security Adviser H.R. McMaster. And there were others that knew of my concerns in the process.”

“So, when the president was charting a different course,” she went on, “and really giving us a strong hand for America and for our friends, they just thought that he was going on in the wrong direction. And so, when they sat me down that day, they were attempting to tell me that if I would work with them, they were trying to save America and keep people from dying. But we saw, when the embassy moved from Tel Aviv to Jerusalem [3], the sky is still up there. It didn’t fall — and we didn’t see casualties.”

“What we saw was a courageous moment by the president that many presidents had tried before that was very successful. And it acknowledged a fact, which Jerusalem is the capital of Israel.”

And regarding her working relationship with the president, which she said was very strong, she said, “I do think he’s misunderstood. I can tell you from the first day to the last day that I worked for the president, he always listened. He was always conscious of hearing other voices allowing people to debate out the issues and then he made his decision. He is a disruptor, and this is the time in our country where we needed a disruptor.”

“But there wasn’t a time where I called him and said, ‘Look, I think we should at this another way’ where he didn’t say, ‘Well, how do you see that playing out?’ and we had a great discussion over it. I still consider him a friend today, and I will tell you that that’s what’s been so hard is I think that they’ve been trying to impeach him since the second he was inaugurated.”

“And I think that if you look at the results of what this president has done, you’re seeing record unemployment, you’re seeing an economy that’s booming. Look at the stock market from last week. But you’re seeing real hard decisions that were made. Getting out of the Iran deal, moving the embassy from Tel Aviv to Jerusalem, getting us out of the Paris Climate agreement, which was an unfair situation. Getting, actually, Kim [Jong-un] in North Korea to come to the negotiating table. [4]”

“I mean, there have been some really tough, courageous stands that have been made, and in all scenarios I saw a president who was very thoughtful, looked at all of the issues, made decisions, and it was a pleasure and honor to work with him.”

“And I will tell you that it’s not what people portray. This was someone that the reason we got along so well is because I told him the truth. And he was always willing to listen to that.”

“And so I think it’s too bad that a lot of people don’t want to see that,” she said. “What you see on TV is what you get, but what you see behind the scenes is someone who really cares about America and wants to do everything he can to strengthen it.”

OMG✔
Sat here waiting for @seanhannity [5] to get
Nikki Haley on..
Would he ask her if she expressed her Concerns about Tillerson & Kelley to @realDonaldTrump [6]
Indeed she did so & was Specific about the Agendas
They opposed and would've undermined. #GreatInterview [7] @seanhannity [5] pic.twitter.com/TKYobqlf3Y [8]