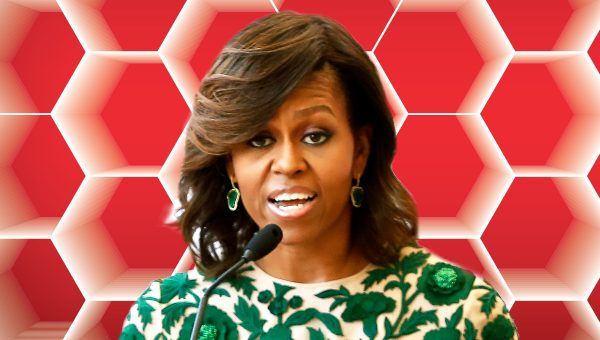 Self-described “forever first lady” Michelle Obama [1] has been nominated for a Grammy award for the audiobook version of her popular memoir, “Becoming.” [2]

This nomination comes in the Spoken Word category, in which she’ll compete against a wide array of other “artists,” including actor-director John Waters, poet Sekou Andrews, and members of the Beastie Boys.

She narrated the memoir, which has sold well over 10 million copies as of this past spring.

The Grammy awards have a history of celebrating political figures in this category.

Former President Jimmy Carter has won the award three times, including last year for his New York Times best-seller, “Faith: A Journey for All.”

Bill and Hillary Clinton have also each taken home a Grammy award, while Michelle Obama’s husband, Barack Obama, won twice, once as a senator and once as president.

The success of Mrs. Obama’s book is due, in part, to her book’s criticism of President Donald Trump.

The entertainment industry simply adores that kind of thing.

Excerpts from “Becoming” show her disdain for Trump [2] on a variety of topics.

The one thing she’ll never forgive him for, in her mind, is the president’s attempts to spread birther conspiracies about her husband.

“The whole thing was crazy and mean-spirited, of course, its underlying bigotry and xenophobia hardly concealed,” she said in the book. “What if someone with an unstable mind loaded a gun and drove to Washington? What if that person went looking for our girls?”

Anyone who has read Michelle’s college thesis—a document so illiterate and incoherent that it was written, as Christopher Hitchens put it, in “no known language”—will chuckle heartily at this one https://t.co/6VSdDsSuMu [6]

Making numerous tour stops to promote the book, Michelle Obama would miss nary an opportunity to denigrate President Trump and prop up her husband as a better man.

During an interview with Stephen Colbert, Michelle Obama compared America under President Trump to living with a negligent father.

“Sometimes you spend the weekend with divorced dad,” declared Mrs. Obama. “That feels like fun, but then you get sick. That is what America is going through. We are living with a divorced dad.”

Here is Michelle Obama comparing Trump to a “divorced dad” on stage in London last night and Stephen Colbert even doing a hilarious apparent impression of the president @MichelleObama [3] @L8ShowColbert [8] #iambecoming [9] pic.twitter.com/F3OgggWpVW [10]

Michelle Obama’s Grammy nomination will be welcome news for her mother.

In a text exchange following a previous Grammy Awards ceremony, Michelle Obama’s mother asked her, “Did you meet any of the real stars or did you run right after you were done?”

Not missing a beat, the former first lady reminded her mother, “I am a real star [12] … by the way.”

Now she can add Grammy-nominated artist to the resume.