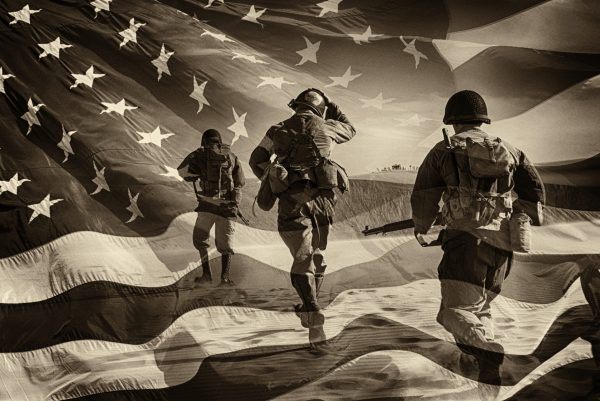 Some notions are just so astoundingly dumb, one has to wonder how they survive the distance it takes to travel from the speaker’s mouth to an unfortunate listener’s ear.

This was the case recently in the picturesque city of Port Angeles [1], Washington, located across Puget Sound some 80 miles northwest of Seattle.

Port Angeles Mayor Sissi Bruch has pretzeled herself over the presence of two metal silhouettes of Revolutionary War soldiers affixed to a new fence at Veterans Memorial Park there.

Ironically, the “soldiers” went on duty at a locked gate in a fence installed because of the homeless people trashing the park and vandalizing a replica of the Liberty Bell on display there.

Built with private funds reportedly, the fence design and construction went through the city’s building permit process and acquired all the necessary documents and permissions — including permission to install the colonial sentries.

It seems Mayor Bruch wasn’t paying attention until she said some city residents — hypersensitive snowflakes, in my opinion — made their ludicrous complaints [2].

The park celebrates and memorializes [3] the ultimate sacrifices made by American veterans as far back as the Revolutionary War.

I’m thinking all those veterans, from then to now, found their guns pretty damned useful.

Mayor Bruch may be a fine person, but her giving undeserved attention to the cranks who complained is an embarrassment to a fine community.

According to KIRO radio host Dori Monson [6], the artist who created the images, Bob Stokes [7], lives in Port Angeles and is world-renowned.

He has created “art for significant sites around the globe, including Naval Station Pearl Harbor and San Francisco City Hall, and for famous personages, such as Pope John Paul II, President Bill Clinton, Ralph Lauren, and George Lucas.”

Mayor Bruch scheduled discussions about removing the armed soldier images for a city council meeting. Apparently, she felt their possible removal was a legitimate issue.

She blamed her reaction to the issue on residents’ complaints. “I’ve had comments from people saying, ‘Do we have to do guys with guns when guns are killing our children in schools?’” she said in a memo released this past Saturday [8].

Let’s dissect this comment by making a point that gets made over and over — but doesn’t seem to sink in these days.

People sometimes misuse both guns and cars and they kill children. Guns, like cars, are inanimate objects that remain that way until a human being animates them.

Why is that so hard for some people to get? Because they don’t want to get it.

Mayor Sissi Bruch wants to remove the representations of guns from the new fence at Veterans Memorial Park.

Mayor Bruch’s foolishness gets worse when, according to the Peninsula Daily News [8], she suggests, “We can use other symbols. The symbols should be of the democracy that veterans defend rather than the ‘tools of violence’ they use to do so.”

My head is in danger of imploding right now. Once again, I feel I have to defend myself and my law enforcement profession because of the “tools of violence” I carried every day at work for over two decades.

What a thing to say about police officers and members of the military who use guns to defend the mayor’s freedom to say dumb things like that.

But that defense doesn’t include not allowing her to suffer verbal repercussions and castigations for those irresponsible words.

Still, I’ll concede the mayor is half-right. At least she’s calling guns “tools” — which is exactly what they are. Guns may be described as tools of violence in the hands of bad guys — but in the hands of good guys, they are tools of protection.

Fortunately, and refreshingly, Mayor Bruch has experienced a significant backlash [15] from the community.

KGMI Radio reported, “A city council member and the fence designer joined hundreds in the community pushing back against the idea [of taking the armed soldiers down].”

John Carlson of KVI 570 AM radio updated the situation. He reported that the mayor had “made a 180” and canceled a city council meeting agenda item set to discuss removing the “soldiers.”

Carlson noted that in making her about-face, Mayor Bruch, rather than apologizing for creating this unnecessary turmoil, essentially told the public she was sorry if people didn’t see the issue the way she did.

Mayor Bruch, to myclallamcounty.com [16], wrote, “After talking to the deputy mayor, we have decided to remove this item from the Nov. 6, 2019 City Council agenda.” The mayor went on to say the backlash from residents would prevent a “thoughtful conversation.”

But how can you have a “thoughtful conversation” about a thoughtless idea?

In canceling the discussion, she blamed the community’s visceral reaction “to the spread of misleading and incorrect information.”

And I have to say: When what is said is the truth — that’s not “misleading and incorrect.”