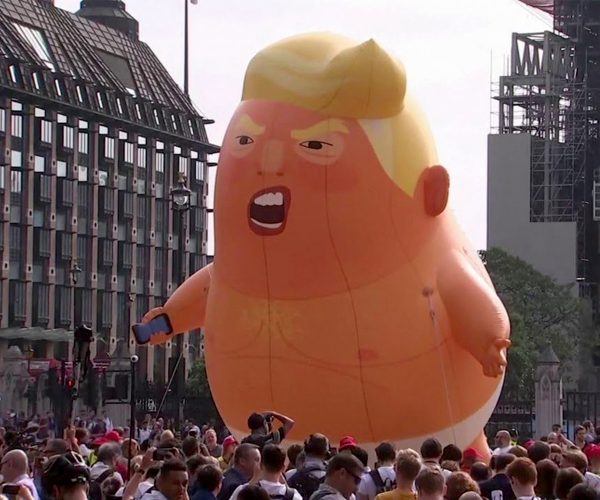 A man was taken into custody on Saturday after he stabbed a “Baby Trump” protest balloon on display near the University of Alabama [1], where the president was attending the Crimson Tide’s football game against LSU [2].

Hoyt Hutchinson, 32, was charged with felony first-degree criminal mischief, according to the Tuscaloosa News [3].

The paper reported that Hutchinson posted a Facebook Live video saying he planned to deflate the balloon depicting Trump as a crying baby wearing a diaper and holding a cell phone.

“I’m going down here to make a scene, so y’all watch the news,” he said in the video. “This is pathetic. I’m fixing to get rowdy.”

Jim Girvan, the organizer of a group that “adopts” out Baby Trump balloons for protests [4], told the Associated Press a man charged the balloon with a knife and cut an 8-foot-long gash in the back.

Donors contributed $7,882 to bring the inflatable roughly a mile from Alabama’s Bryant-Denny stadium for the Alabam-LSU game.

The rental cost $4,500 and any donations above that went to the Equal Justice Initiative.

The balloon was surrounded by about a dozen anti-Trump protesters.

“I’m fixing to pop this balloon, without a doubt. Stay tuned. This should be interesting.”

Donors gave a total of $955 to contribute to his legal fees.

Robert Kennedy, a volunteer “babysitter,” said the balloon immediately began to sag after it was cut.

The day had been going mostly smoothly [5], Kennedy said.

Some people yelled “Trump 2020” as they passed while others posed for selfies with the balloon.

But then Kennedy said a man sidled up on the back of the balloon and attacked it with a knife.

He ran away but was caught by police officers.

The Associated Press contributed to this Fox News [6] report, which is used by permission.