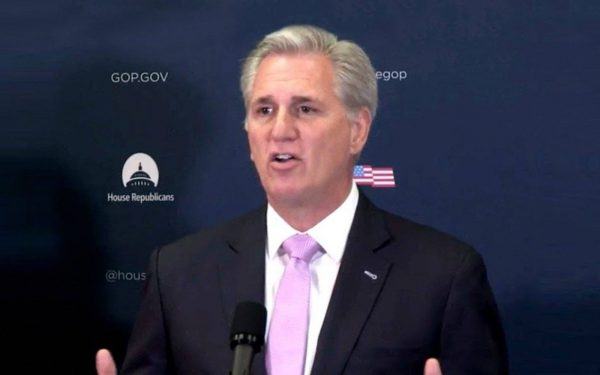 McCarthy said, “It is clear now more than ever this is a calculated coup, and it is being orchestrated by Adam Schiff.”

He added, “We are watching him orchestrate a takedown of a president after we just celebrated 30 years of taking down the Berlin Wall.”

McCarthy has a point.

Schiff has done everything he can to make it as difficult as possible for the president, even doing things like rejecting a Republican request for the whistleblower to testify.

Related: Lindsey Graham: Congress Must Know Who the Whistleblower Is [2]

As The Political Insider [3] reported on Sunday, “GOP California Rep. Devin Nunes, the ranking member of the House Intelligence Committee, listed the whistleblower, who is reported to be a CIA analyst, along with seven other potential witnesses that Republicans want to have testify publicly in the impeachment proceedings.”

“We are here watching @RepAdamSchiff [6] orchestrate a taking down of a President, after we just celebrated the 30 years of taking down of #BerlinWall [7]," https://t.co/XW1i4SsTW9 [8]

Schiff shot down calling the whistleblower to testify.

He asserted that his August 12 complaint “not only confirms, but far exceeds, the initial information in the whistleblower’s complaint.”

“The whistleblower’s testimony is therefore redundant and unnecessary. In light of the president’s threats, the individual’s appearance before us would only place their personal safety at grave risk,” Schiff wrote in a letter to Nunes.

From day one, Democrats’ efforts against President Donald Trump [1] haven’t been about seeking truth or looking out for national security.

They have only sought to oust this president by any means necessary, in our view.

The impeachment inquiry is simply their latest scheme. They will do anything they can to undo the results of the 2016 election, as opposed to waiting until 2020 and letting the American people have their say.

So Kevin McCarthy is right.

This is a calculated coup by Adam Schiff and the rest of his party.

Democrats aren’t seeking truth regarding Ukraine or anything else — they want revenge.

Read more at ThePoliticalInsider.com:
Cindy McCain Claims Her Late Husband Wouldn’t Approve Of Republicans Defending Trump [15]
Donald Trump Jr. Lit Up the Ladies of ‘The View’ – Crowd Cheers Him [16]
Pelosi Is Called Out Over Impeachment: ‘Must Suck to Be That Dumb’ [17]