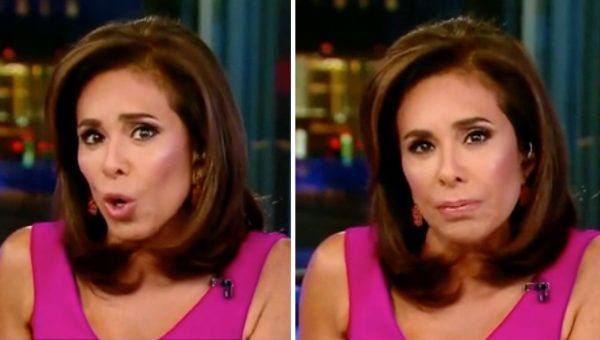 Public hearings on the impeachment inquiry [2] are set to begin this coming Wednesday.

But Pirro talked about the deep hate by the deep state for Trump — which began to emerge just days after the president was inaugurated back in January 2017.

She also said Congress will “take any complaint” that emerges from almost anyone, in order to go after the commander-in-chief.

And she called out Rep. Eric Swalwell (D-Calif.) — who tried to run for the 2020 Democratic nomination and failed, after polling at zero [3] — for some of his recent commentary.

“It’s an abuse of power,” claimed Swalwell on CNN’s “New Day” last week, “to remove an ambassador for political reasons if you don’t like what they’re doing period.”

“Hey, Swalwell, a primer,” said Pirro after playing a clip of that comment by him. “You’re still polling at zero!”

“Another primer,” she added. “The president of the United States can get rid of an ambassador, just like the president had the right to the get rid of [former FBI Director] Jim Comey, just like [former President] Bill Clinton had the right when he cleared out the U.S. attorneys from the Department of Justice? Don’t you remember your hero Obama saying ‘elections have consequences’? Or are you a special kind of stupid?” said Pirro.

Here’s more of her commentary.

“Now, I don’t want to get into all of this because nobody really cares,” she said.

“But this State Department guy George Kent — he says the president demanded that [the] Ukraine president investigate the 2016 election. Then he says he has no firsthand knowledge of this evidence. To me, cancel him out!”

“Then he said Rudy [Giuliani, the president’s personal lawyer,] didn’t like the way he talked about [former ambassador to Ukraine] Marie Yovanovich [4]. So what? Cancel him out.”

“They all say the president is undermining the rule of law. What rule of law are they talking about?”

“Here’s yet another primer. Whenever the federal government gives you money, they make a demand in return. It’s called a quid pro quo with politics, but it’s not illegal and it’s not impeachable,” said Pirro.

“If you are a city, town, village, state, or even a local D.A., like me, and you ask the federal government for money, they will require that in exchange for that money, you do and prove that you did X, Y and Z.”

“So, what do we have here?” she continued.

“And was his hearsay second-, third- or fourth-hand? Did [Rep. Adam] Schiff [D-Calif.] provide a lawyer for him? Is he an agent of the coup? What brought this person to us? Why was he even in the White House?”

“The statute, by the way,” added Judge Jeanine, “does not give the whistleblower anonymity. But everyone wants to protect [him].”

“Everyone,” she said, wants to go “along with the Schiff narrative so we don’t get to find out what this person’s role was or how long he was being groomed [for this role]. In the end, none of this matters or rises to the level of an impeachable offense.”

“I still want to know what quid pro quo Barack Obama got,” she added.

“I still want to know what Barack Obama was promising [Vladimir] Putin to [Dmitri] Medvedev [who was then the Russian president] and the hot-mic moment [6] that he could do [something] after the election.”

“In the meantime, let the president do the job we elected him to do.”