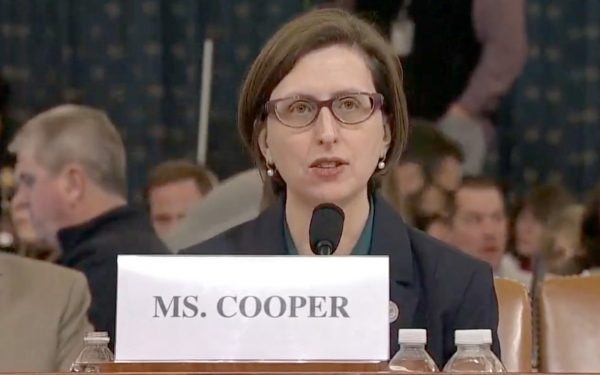 As the Wednesday evening questioning resumed during the House Intelligence Committee impeachment inquiry hearings, Democrats leaped on a statement by Laura Cooper (shown above), the deputy assistant secretary of Defense for Russia, Ukraine and Eurasia, that seemed to confirm that the Ukrainians knew about a hold on military aid soon after the phone call between Presidents Donald Trump and Volodymr Zelensky [1] on July 25.

If this was true, the Democrat theory went, the Ukrainians could have felt threatened by an alleged quid pro quo.

One problem: Cooper never said that.

She said only that her staff received indications that the Ukrainians “are asking about security assistance.”

She never said it had anything to do with a halt in aid or a quid pro quo.

Cooper further said she thought the aid was being held up due to Trump administration concerns over “corruption.”

Not politics, not Joe Biden — but “corruption” on the part of the previous Ukrainian regime that even the Dems admitted was corrupt.

This was, not coincidentally, the same environment of lax government ethics that Hunter Biden, a son of former Vice President Joe Biden, operated under.

GOP messaging this round focused on President Trump’s fulfillment of the campaign promise of during his candidacy to look askance at automatic payments of foreign aid.

Rep. Elise Stefanik (R-N.Y.) asked the other witness of the evening, David Hale, the under secretary of State for political affairs, if there was “no business-as-usual approach to foreign aid” under Trump. Hale said that was so, that he welcomed the review, and went on to comment that he found nothing “nefarious” about the administration’s moves in Ukraine.

The press ignored Hale and continued their feeding frenzy over something Cooper never said. What she did say is that she “never heard directly from the president” about any untoward plan or policy toward Ukraine.

So again, the Democrats are using second- and thirdhand information to attempt the removal of a duly elected president of the United States over the heinous anti-constitutional outrage of the denial of a visit to the White House. If that.

Rep. Jim Jordan (R-Ohio) reminded the committee that, since the previous Ukrainian regime by most estimations was corrupt, it was natural for a president already suspicious of foreign aid to want a thorough review before dispensing hundreds of millions in tax dollars. When that was done in less than two months, the aid was sent.

That would be a normal and wise procedure for any U.S. administration. But when the Dems look at it under this president, they see a high crime. Well, they actually see an election loss in 2016.

That, to them, was the real “crime” that they’ll do anything to avenge.

Where was he going with that? Likely it was some ill-conceived emotive Irish-to-Irish plea to trash Trump — or some such other bit of malarkey. Whatever it was, Maloney’s move fell flat.

(Trump, a Scotsman by maternal lineage, must have been laughing into his haggis.)

Maloney also tried to get Cooper to say that a large amount of aid to Ukraine was held up by Trump only to be restored by Congress. But he shot awry again, as Cooper briefed him that “88 percent” of aid was forthcoming before Congress had anything to do with it. The man must have the worst staff work on the Hill.

To close out any sane comments, Ranking Member Devin Nunes (R-Calif.) said the entire inquiry was a “three-card monte” game with the American people as the mark.

It might be added, it’s an inquisition with rules of evidence that only Spanish Grand Inquisitor Torquemada would appreciate.

With that, we trudge on to Thursday’s hearings — those Americans who are still watching this spectacle, that is.