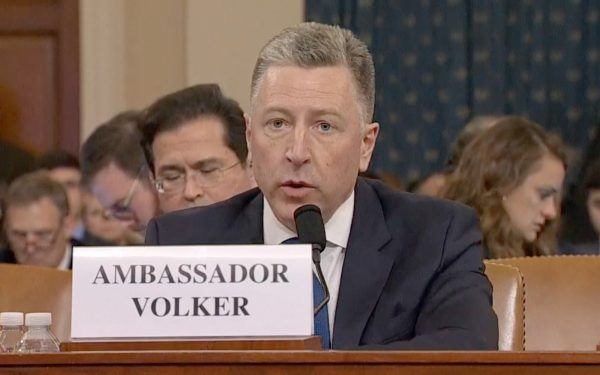 The Judiciary Committee has the responsibility to conduct impeachment hearings — hence, the designation of these hearings as an “inquiry.” Nunes speculated the reason Schiff had the lead here is that the Dems had “no confidence” in Judiciary Chairman Jerry Nadler (D-N.Y.).

Nunes called the Dems on their “dramatic absurdities” during the hearings and blasted Dem “media sympathizers” who parrot the Democrat line. Given that President Volodymr Zelensky of Ukraine has publicly said nothing untoward was said during the July 25 phone call with President Donald Trump — the alleged quid pro quo being the core of the Dem case — Nunes accused Democrat committee members of calling the Ukrainian president “a liar.”

The witnesses then gave their opening statements. Morrison was concise and efficient. Volker was long-winded and has an unnatural relationship with his own resume, in this writer’s opinion.

Morrison did state, though, that Russia was “a failing power.” He went on to say, using a Cold War maxim, “We fight Russia in Ukraine so we don’t have to fight them here.”

The question is then posed: How would a “failing power” have the strength to make us fight them on our own shores?

The gist of Volker’s opening statement was on the supposed Russian threat — and a hit against presidential lawyer Rudy Giuliani. An extraordinary development we’ve seen, as of late, is that the State Department has become such a hawk on anything, including Russia.

Personnel at the State Department have the time-honored reputation of promoting co-existence with opposing powers, if not harboring people like Alger Hiss, who were covert Soviet spies during the Cold War.

But strangely, today, the State Department wants to fight Russia almost hand-to-hand in Eastern Europe. Quite a startling change of attitude among U.S. diplomats.

The vast majority of the Democrat and GOP counsels’ questioning of both witnesses was a slow and detailed recitation of ground the committee had already gone over more than once. One exception was the spectacle of Morrison’s attorney trying to stop him from saying that Lt. Colonel Alexander Vindman, one of the witnesses from the morning, had leaked information to the press.

She was unsuccessful — and he confirmed that he had heard Vindman had done this.

Morrison’s further testimony indirectly portrayed Vindman as a petty operator more concerned with his place at events than with policy or duty.

Another exception, right before the break at 5:40 p.m., was that Volker expressed incredulity at Giuliani’s being roped into the “irregular channel” on policy in Ukraine.

Volker said he thought the president’s lawyer, as a private citizen, was a resource.