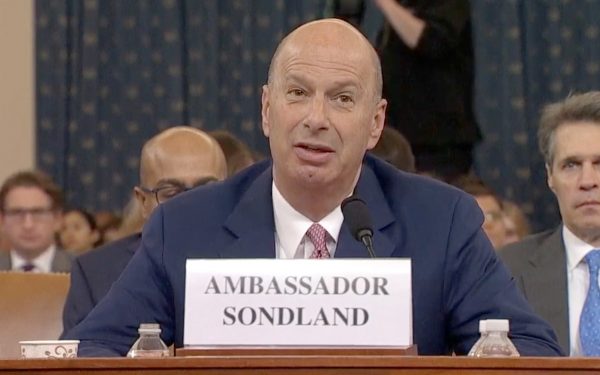 Gordon Sondland [1], the European Union ambassador, finds himself at the center of Wednesday’s impeachment inquiry hearings [2] that are taking place in Washington.

He is considered a key witness, but unpredictable due to his evolving accounts of how the Trump administration dealt with Ukraine [3].

Before the wealthy businessman appeared on the scene in D.C., he was a Seattle hotelier and major donor to President Donald Trump.

Here are five other facts about the 62-year-old.

1.) Family survived the Holocaust. Sondland once told the Portland Business Journal that his parents escaped from Nazi Germany.

“My mother was able to get out of Nazi Germany because her father was Russian, and those with a Russian passport could leave,” he said. “My father was not so fortunate and he had to be smuggled out of Germany by being tied to the bow of a vegetable freighter that was leaving for the North Sea. He almost lost one leg because it was so cold and he wound up in France.”

His father went on to fight Nazis in North Africa. His family eventually ended up in Uruguay and moved to Seattle.

2.) Power couple. Sondland is married to Katherine Durant, a successful Portland real estate broker. The couple was featured in OregonBusiness.com in January about their courtship (she said he wasn’t her type at first).

Durant, who helped run the hotel business while her husband served overseas, told [4] The Washington Post that the media is not treating her husband fairly. “We live in a world right now where there’s no upside to supporting someone like Gordon who is working for Trump; it’s a mob.”

Related: Hearings Up as Gordon Sondland Throws Rudy Giuliani and the White House Under the Bus [2]

3.) Ayn Rand influence. Sondland is a fan of Ayn Rand, the author of “The Fountainhead” and “Atlas Shrugged.”

President Trump is also a fan of “The Fountainhead.” The author died in 1982.

4.) Attraction to power with power. An associate of Ted Kulongoski, the former governor of Oregon, told Fortune that Sondland works hard to ingratiate himself with influential people.

Sondland is a major Republican donor and a “divining rod for people with political power,” the source said.

“If you walk into a crowded room and you’re looking for the most powerful person, look for Gordon, because you know he’s tall and he’ll be within five feet of them.”

Related: If Trump Testifies at Impeachment Hearings, Watch Out [5]

5.) Abandoned Trump. Sondland, who initially supported Jeb Bush in 2016, made a public break from then-candidate Trump after his comments on the Gold Star Muslim family [6].

He went on to donate $1 million to Trump’s inauguration through some of his companies, NPR [7] reported.