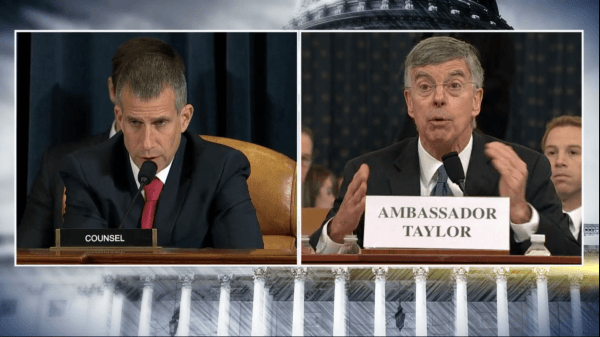 When he was on script during his opening statement during the House Dems’ impeachment inquiry against President Donald Trump on Wednesday morning, acting U.S. Ambassador to Ukraine Bill Taylor [1] was good.

He was even impressive at times.

But under cross-examination by GOP counsel Steve Castor (shown above left) in the early afternoon, Taylor (above right) wilted — seeming nervous and even halting at times.

He seemed confused, even, by the specificity of the Republican response.

His sharp memory as related during the chronology of his opening statement failed him during cross-examination.

He didn’t recall — or was unable to answer questions about more than several incidents.

His “I don’t recall” and “I have no knowledge” statements were many.

It got so bad that Rep. Adam Schiff (D-Calif.), chair of the committee, had to intervene and protect him from GOP questioning, it seemed to this writer.

His cross-examination tone, though, was better than Taylor’s.

The Dems thus may switch to Kent for a forward defense.

And if they do, the change will be obvious.

Democrat media coaches must be getting nervous — and media spin will gear up to defend Taylor and condemn Republicans for daring to question a “soldier and diplomat.”

Their umbrage will be comically contrived.

The script was good for them when Dems could control it.

But under scrutiny, it began to fall apart.