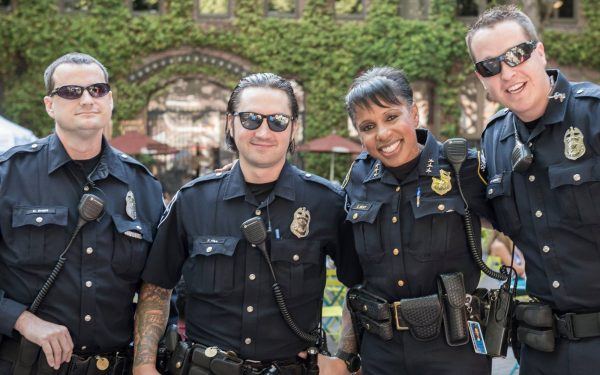 The two Seattle police officers had responded to a 911 call from this same apartment in a low-income neighborhood in Seattle’s Central District, known as the CD, just a week before a new call.

But it wasn’t the minor incidents there that struck the officers and tugged at their hearts.

It was the fact that two young girls, just 13 and 6, had no beds and were sleeping on the floor.

It doesn’t matter why these kids were sleeping on the floor, or why any kids do so, for that matter. It only matters that they shouldn’t be.

Back in 2014, that’s what two officers believed — and they felt they had to do something about it.

After leaving the apartment, Officers Jeremy Wade and Ryan Gallagher agreed then and there that they would buy beds for the little girls.

Once they purchased the beds, they returned to the house with their gifts. They asked if it would be OK to give the beds to the girls and set them up for them. The kind gesture was sincerely appreciated.

And from this selfless act by two cops, the Beds for Kids project [1] was born.

Now, each year the program provides bed for hundreds of kids in the greater Seattle area.

With the enthusiastic approval of then-Police Chief Kathleen O’Toole, and the capable assistance of the Seattle Police Foundation [2], by 2015 the effort was expanding exponentially.

To load, transport, and set up the beds, IKEA and UPS stepped up to help.

Mattress Firm [3], OfferUp [4], and KIRO radio [5] also participate, as well as volunteers made up of Seattle police officers, their family, and friends.

Officer Wade noted that many kids in low-income neighborhoods, for a host of reasons, do not have beds. He also commented that for some kids, the ones delivered by the police department’s Beds for Kids project is the first bed they’ve ever slept on in their lives.

Said Officer Gallagher, “I felt like maybe we got more out of it than they did. Just the experience of being able to see the kids’ looks on their faces was pretty incredible.”

When police critics and certainly cop-haters witness such acts by law enforcement officers, they often cynically write them off as anomalies. Well, as I explained in a 2017 article about this program [11], “These cops are not the exceptions; these cops are the rule.”

I saw cops performing acts of kindness like this throughout my entire career. It’s just that cops don’t go around boasting about it; they just do it and then go back to work.

Here’s what I mean: I know an officer who promised a young boy he’d get his bike fixed for him if he got good grades at school. How did I find out? I saw the officer carrying a small bicycle back to the precinct from the bike shop half a block away.

He’d told no one about it. He only told me because I’d asked him why he was carrying a kid’s bike.

Two other officers I know, separately, made it a point to visit elderly folks they’d met and made friends with, one in a nursing home, the other in his empty house since his wife had died.

And many years ago, one late December afternoon near Christmas, a man came into the precinct to report a car prowl.

He told us he’d just arrived in town with his family and had parked up on First Hill where several hospitals are located. He said they’d be staying at the Ronald McDonald House [12] while their child received cancer treatments.

While checking in, someone had broken into their car and stolen the family’s belongings, including all the wrapped and hidden Christmas presents for the children.

Officers at my precinct — the same precinct where Officers Wade and Gallagher would one day work — passed the proverbial hat around and made sure that family could still have a nice Christmas.

Related: How Cutting-Edge Cop Training Can Save Even More Lives [13]

Talk to any cop in any town, city, or county in America — and you will hear similar stories.

I’d bet, in fact, you’d never hear a single officer say he or she does not have stories like these. We all do.

This’s why a story of giving, like Beds for Kids — one that becomes so big it cannot hide — is so important for people to know.

This generosity is a living, growing, and sustained gesture that provides a glimpse of giving that represents all cops who not only protect and serve but also — though most often unknown — go well above and beyond the call of duty for their communities.

Still, this story is not important because it reflects well on police officers.

Rather, it’s important because a child was once sleeping on a threadbare carpet on the floor. But tonight, because of some cops who care, that child is warm and cozy and sleeping in a nice soft bed.

What could be better than that?