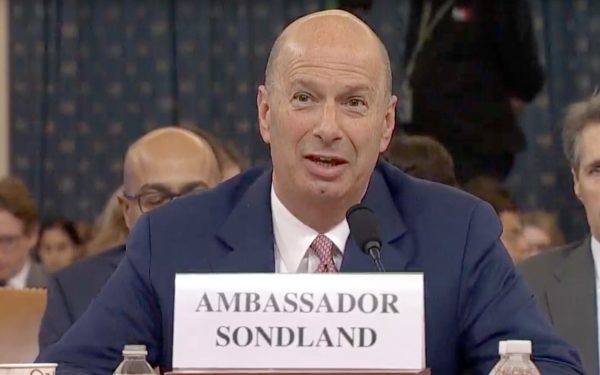 The back and forth between U.S. Ambassador to the E.U. Gordon Sondland [1] and House Intelligence Committee members took on two distinct flavors.

The Democrat House members of the committee tried to get the witness to implicate the president of the United States in a quid pro quo with regard to Ukraine and military assistance — while GOP members pointed out the many contradictions in Sondland’s statements and repeated his previous testimony that the president had told him of Ukraine and its newly elected president, Volodymr Zelensky, “I want nothing!”

Rep. Mike Turner (R-Ohio) focused on Sondland’s contention, obviously exculpatory for the president, that there was no tie between military assistance and a Ukrainian investigation into Burisma.

Rep. Jim Jordan (R-Ohio) pressed Sondland on his “presumption” of a relationship between the presidents who were meeting each other and the Burisma probe.

Said Jordan, “No one on the planet,” including Sondland by his testimony, heard the president ask for such an action.

GOP members believed that, said Wenstrup — but they also thought, given the myriad negative statements on Trump by Ukrainian government officials in 2016, that the Ukrainians also had attempted to influence that election.

Through all of this, various Democrat members spun and weaved their way in and out of discredited theories [2] and fantasies of Trump corruption. And no one called out Rep. Sean Patrick Maloney (D-N.Y.), by the way, when he blatantly badgered Sondland during his questioning.

Maloney seemed not very amused that, under GOP pressure, the morning Democrat advantage had taken a dive.

Rep. Mike Conaway (R-Texas) revealed that the reliably leftist Washington Post had virtually called Schiff a liar by giving him three out of four possible “Pinocchios” regarding his statement that the CIA informant’s anonymity is protected by law.

Even The Washington Post seems to think Schiff is hiding the informant (otherwise known as the “whistleblower”) because he knows Republicans would tear him apart on the witness stand.

It was also pointed out by the GOP that somebody did not get the right memo to Rep. Earl Blumenauer (D-Ore.), who is leading protests against his party’s own witness at the sites of Sondland-owned hotels in Oregon. On the other hand, if this is intentional on the part of the Dem member from Oregon, then how is it not witness intimidation?

Rep. Elise Stefanik (R-N.Y.) reiterated that Sondland had previously testified that the president “never told me directly” about any quid pro quo and that he “never heard those words from the president” in regard to any arrangement of that nature.

Dems continued to try to get Sondland to implicate the president on an extortion or bribery scheme — yes, the narrative changes by the moment with the Democrats — involving arms deliveries and political action against former Vice President Joe Biden.

But Sondland would not go that far.

He stuck to his “presumption” of the alleged Giuliani-inspired deal of a President Zelensky meeting with President Donald Trump in exchange for a probe of Burisma.

Dems continued to flail and pirouette this way and that, searching for a charge that can stick to the president.

Related: Sondland: Five Things You Must Know About Him [4]

But the Democrat promise of the morning, when the GOP looked to be in trouble, faded away in the afternoon after relentless Republican questioning of Sondland.

Meanwhile, Trump is touring an Apple manufacturing plant in Austin, Texas, on Wednesday afternoon — and more than a few conservatives are pointing out that most Americans are preoccupied with working their jobs, running their households, getting the kids to school and back, and so much more.

“Most Americans do not care” about these extended impeachment inquiry hearings, Turning Point USA’s Rob Smith pointed out to Neil Cavuto on Fox News on Wednesday afternoon.