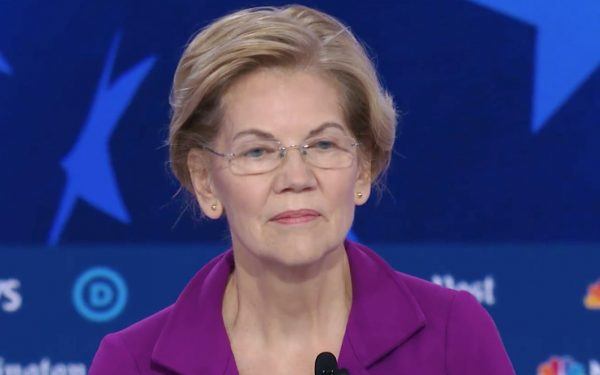 “The real point here is that we need to stop this manmade crisis at the border,” Warren said.

“Trump is the one who has created this crisis,” she said.

“When I found out that our government was actually taking away children from their families, I went down to the border,” she also said.

See this tweet about her remarks on Wednesday night:

“There’s like a giant Amazon warehouse filled with cages of women, cages of men, and cages of little girls and little boys,” Warren claimed.

“A great nation does not separate children from their families,” she added.

Migrants making their way to the U.S.-Mexico border, coming from both Mexico and Central America, are often brutalized by cartel smugglers for a variety of reasons.

These cartels have made billions from the drug trade and human trafficking because of America’s poor border security.

Wouldn’t a more secure border make it harder for these foreign organized criminals to make money off the backs of poor people?

How has President Donald Trump’s desire to build a wall and strengthen our national security made the illegal immigration problem worse, much less created it?

Breitbart spelled out [5] how bad the situation is south of the U.S.

“In 2017, there were 26,573 murders [7], 1,275 kidnappings, and 5,357 extortion cases in Mexico, marking the bloodiest year in the country in 20 years, despite these figures not capturing the scope of the cartel violence occurring in Mexico.”

Neither President Trump nor his policies caused these awful events in any way.

“In the last year alone, Immigration and Customs Enforcement (ICE) agents arrested [8] more than 6,600 convicted murderers and convicted sex offenders who were in the United States illegally,” Breitbart noted.

Again, would Warren have Trump NOT crack down on these crimes?

And how, pray tell, is any of this the president’s fault?

“For each one of these crimes, there are at least one or more American and legal immigrant victims.”

Warren has it exactly backward.

The current illegal immigration crisis is the fault of every president and most politicians who came before Donald Trump, people who did nothing to strengthen America’s porous southern border.

Donald Trump is the first to recognize the problem and have the will to do something about it.

Sen. Warren couldn’t be more wrong in her claim, in our view.