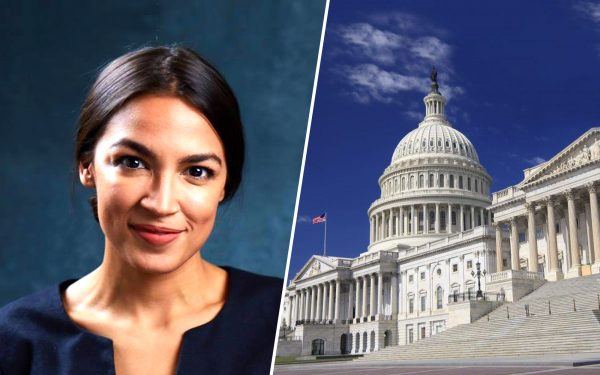 The socialist darling of the Democrat Party, known for reprehensibly comparing ICE detention centers to concentration camps, made the controversial comments during an interview with Yahoo News on Tuesday (see the tweet below with more on that).

In one particular email, Miller suggested the idea of a complete ban on immigration “like Coolidge did,” which The New York Times [3] incorrectly claims is a link to a 1924 law “seen today as a symbol of bigotry and was heavily influenced by the eugenics movement.”

“I think the most clear and disturbing of them all is the fact that Stephen Miller has just been exposed as frankly a neo-Nazi and a white supremacist,” Ocasio-Cortez falsely claimed.

“He was citing eugenics as the rationale for our policy in the southern border and Donald Trump clearly thinks that — clearly believes in eugenics — given the fact that he has put and maintained Stephen Miller in a position of power after these revelations.”

AOC says impeachment inquiry is ‘at the point of no return’ in interview with Yahoo News https://t.co/NUKt8Vb0fk [4] by @hunterw [5] pic.twitter.com/Z1yYgEu5oh [6]

She incorrectly stated, in our view, that President Trump clearly committed a crime, a notion that facts and actual testimony thus far have contradicted.

“Yeah, I’m, well, clearly momentum is build[ing],” AOC opined. “We’re kind of knee-deep here in [the] impeachment inquiry and so um, you know, at this point I think we’re beyond the question as to whether Trump has committed a crime or whether he has violated the Constitution.”

Related: Hearings Heat Up: Sondland Throws Giuliani and White House Under the Bus [8]

“It’s not just Trump, but who else is going to be implicated in this. And so, you know, I think when it comes to what we’ve discovered, we’re at the point of no return and it’s just a question of how many crimes have been potentially committed and who else has committed them,” she added.

The comments echo those that the New York Democrat made previously [9] in which she claimed prior to any testimony that impeachment is an “open and shut case.”

She must write these talking points down, eschew running them by a fact-checker, and repeat them ad nauseam because that’s what ignorant people do, as we see it.

“He has committed impeachable crimes. It’s just a question of how many and how many people were involved and who knew.” pic.twitter.com/TTltj4dRbD [11]

Perhaps Ocasio-Cortez was too busy smearing the president as a man who supports eugenics to do her own research.

Had she done so, she may have discovered that the person she’s endorsed for the 2020 Democratic nomination, Sen. Bernie Sanders (I-Vt.), has espoused using population control and abortion as a means to combat global warming.

When asked at a town hall earlier this year if he would support measures to curb population growth [13], including abortion — which disproportionately affects black communities — Sanders was a fan.

“The answer is yes and the answer has everything to do with the fact that women, in the United States of America, by the way, have a right to control their own bodies and make reproductive decisions,” he claimed.

Even the pundits at CNN recognized the comments for what they were.

Let’s just state for the record: talking about needing “population control” through ABORTION for the sake of CLIMATE is talking about EUGENICS. The fact that @BernieSanders [14] is willing to entertain this vile idea is not only disgusting, it should be disqualifying.

Sanders has vowed that Ocasio-Cortez would “no doubt” play a significant role in his administration, even suggesting he’d be willing to have her as a member of his Cabinet.

A version of this piece originally appeared in The Political Insider; [16] the article is used by permission.