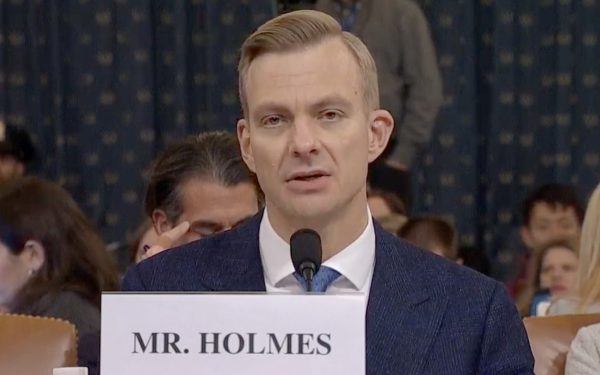 Soon after, he hit presidential personal lawyer Rudy Giuliani, the Dems’ secondary target of this sham exercise, as a rogue player involved in U.S. diplomacy in Ukraine.

The diplomat then went on to defend former Ukrainian Ambassador Marie Yovanovitch [2] and castigated the so-called “Three Amigos” — Kurt Volker, the former special envoy to Ukraine [3]; Ambassador to the E.U. Gordon Sondland [4]; and Energy Secretary Rick Perry — for involving themselves in diplomatic duties out of their official sphere.

The Dems have used the term “Three Amigos” because it is likely polling well for term recognition in focus groups.

Holmes on Thursday went on to relate the details of a lunch with Sondland in Ukraine.

Sondland said yes to Trump, that Zelensky would do “anything you ask him to.”

Then, according to Holmes, the phone — without any supposed action by Sondland — suddenly went quiet to the point that Holmes could now only hear Sondland’s side of the conversation, no longer the president’s.

But apparently, Holmes somehow heard enough bits of the conversation for the purposes of being a Democrat-called witness on Thursday.

Holmes also claimed the Ukrainians “recoiled at playing a part in U.S. elections.”

Strangely, they did not recoil in 2016 when numerous Ukrainian government officials, and even their ambassador to the U.S., criticized then-candidate Trump.

Holmes and Fiona Hill, a high-level National Security Council staffer, either were outside of that very public loop, which would be weird for their high-level assignments, or they’re not straying too far from Democrat-led talking points. Probably the latter.

Hill, coming off as a mirthless and dour policy wonk, began by trashing her native land, saying that because of her northern English accent she could not have professionally risen in the U.K., as she could here in the United States.

She repeated the Democrat mantra that only the Russians had tried to influence the 2016 U.S. election, despite given massive evidence to the contrary.

She also lectured the GOP on the falsehood of the publicly vetted evidence — though it was proven, verified, and sitting in front of her.

Hill’s arrogance was on full display during her protestations that she was not in any way a partisan player.

As she almost spat out that conviction, she did so in full adherence to every single Democrat talking point.

This not only rendered her claim of objectivity absurd to the point of comedy — but makes her a prime target for upcoming GOP questioners such as Rep. Jim Jordan (R-Ohio) [6], Rep. Chris Stewart (R-Utah), Rep. Elise Stefanik (R-N.Y.) [7] and others.